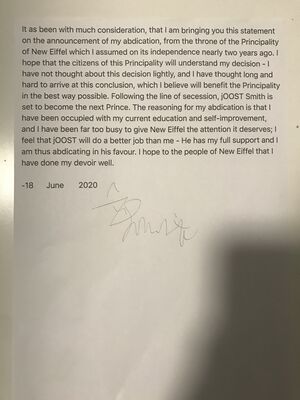 Zabëlle I, the first Prince of New Eiffel formally abdicated on 20 June 2020. Zabëlle announced his wish to abdicate on 16 June, and announced it on multiple platforms, including the New Eiffel Discord server.

Zabëlle was proclaimed the first Prince on 11 August 2018. The Line of Succession Act 2019 was passed on 17 September 2019, making Janus Smith the next in line to the throne. Since March 2020, Zabëlle had been becoming less motivated and more busy. Zabëlle later revealed he had been considering his abdication "for a few months" beforehand. Although there was a decline in Zabëlle's ability to lead, it was only barely notable - However Zabëlle was unhappy with not being able to give New Eiffel his full attention, and thus announced his wish to abdicate on 16 June, on multiple platforms, including the New Eiffel Discord server. On 17 June, Janus fully confirmed he would be accepting the position of Prince. Zabëlle signed his abdication letter on 18 June, which was to be made official on Janus's coronation. A crown was also created for the coronation, which had to be rushed due to Zabëlle's short notice.

Abdication and coronation of Janus

Zabëlle signed his abdication letter on 18 June, which was to be made official on Janus's coronation. The whole royal family was present - Zabëlle took the crown and put it on top of Janus's head, declaring him His Majesty Janus the First, Second Prince of New Eiffel. Zabëlle also gave a speech following his abdication:

It has been an honour to be the Prince of this nation, for nearly two years. We together have held strong through the good times, as well as the tough times. I definitely have no regrets, and I will never stop loving or even being involved with New Eiffel. I wish the new Prince the best of luck, and he has my full support and confidence he will serve and lead the nation successfully.

Janus granted Zabëlle the substantive title of "Duke of Hsed".

Full text of the letter

It as been with much consideration, that I am bringing you this statement
on the announcement of my abdication, from the throne of the Principality
of New Eiffel which I assumed on its independence nearly two years ago. I
hope that the citizens of this Principality will understand my decision - I
have not thought about this decision lightly, and I have thought long and
hard to arrive at this conclusion, which I believe will benefit the Principality
in the best way possible. Following the line of secession, Janus Smith is
set to become the next Prince. The reasoning for my abdication is that I
have been occupied with my current education and self-improvement,
and I have been far too busy to give New Eiffel the attention it deserves; I
feel that Janus will do a better job than me - He has my full support and I
am thus abdicating in his favour. I hope to the people of New Eiffel that I
have done my devoir well.

Janus granted Zabëlle the substantive title of "Duke of Hsed" after his abdication. The letter is now stored in the Royal Archives.