The crisis in New Eiffel is a series of various political, legal and socioeconomic crises within the Principality of New Eiffel which began on 14 December 2019 when the erstwhile Prince Zabëlle I accidentally erased the nation's constitution. The events brought New Eiffelic stability to a halt. The various crises continued with some arguably worsening after the abdication of Zabëlle I and coronation of Prince Janus I. The crisis is marked by legal challenges, parliament's suspension and the establishment of a transitional government, the abdication of Zabëlle I, economic inflation and lack of action from political leaders, hiatuses and departures. It led to the dissolution of New Eiffel.

The crisis is the worst ever in the Principality of New Eiffel and one of the worst for a influential MicroWiki Sector nation,[citation needed] and is the second worst in its predecessors history (after the New Finlandic Civil War).

The 2019–20 constitution crisis which began on 14 December 2019, through the 2020 political crisis on 20 April, into the establishment of the transitional government and now the possible civil war threat is named the crisis in New Eiffel. The crisis is ongoing, with active threats of a possible civil war.

Key crises and events include:

On 14 December 2019, Prince at the time Zabëlle I inadvertently lost the only copy of New Eiffel's constitution while trying to copy and paste it into an online pdf so anyone could view it. The only existing law documentation were acts passed through New Eiffelic parliament, however the legality of these acts as well as passing further acts were of heavy debate. An act labelled as an 'Amendment' successfully managed to be proposed and passed in a parliament session on 18 December. After some discussion from MPs, Parliament was officially suspended on 20 December, and was set to be unsuspended on 6 January 2020.

Without a constitution, the 2019 general election still took place, electing Janus Smith of the Yellow Party as Prime Minister. Parliament was officially "unsuspended" on 6 January 2020 as laid out by the Suspend Parliament Act 2019, although no further sessions ever took place, and due to the constitutional crisis and lack of attention from Janus, the seats of parliament were left undefined with further dispute of who its members were. Furthermore, due to a lack of action from political parties and the Prince's hiatus no new constitution was set in place or even in the works, and all initiatives and attempts at creating one failed.

Due to the constitutional crisis between late January and early February 2020, inflation for the national currency, the New Eiffelic Ping, vastly increased. Due to New Eiffel's already meek economy and inability of reliable official inflation statistics due to it being a small micronation, the exact inflation rate is not known, however it apparently made the currency unusable.

On 14 February, Zabëlle I conducted a successful and supposedly undisputed verbal royal decree, demonstrating that the Prince Powers Act 2019 was still valid and so were all other acts. The decree itself dropped all New Eiffelic island territorial claims. The decree later received mixed opinions from political parties on its validity.

The largest crisis, which was dubbed the '2020 political crisis' in scholar works began on 20 April, after Janus was removed from his position through a motion of no confidence. After short discussions, Christina Nowell became the interim Prime Minister, due to her being the nation's Leader of the Opposition. On 29 April, the Communist Party (later, Labour Party) gained a plurality of seats over the Coalition, after MPs Luke Warren and Pun Watta formed the Communist Party with Leon Montan. Interim Prime Minister Nowell was removed through a motion of no confidence, and Parliament voted to temporarily make Zabëlle I an absolute monarch. On 1 May, the Document Forming the Transitional Government of New Eiffel was signed by the Prince, and Parliament became the Transitional Legislature, and Montan as First Minister, with Nowell becoming Deputy First Minister.

Jayden Lycon from the Cupertino Electoral Supervisory Commission worked with Zabëlle I and Montan after New Eiffel's membership into the Cupertino Alliance in order to host a general election to help end the political crisis. Various delays however lasting in total for nearly a month took place, and the election finally began on 23 May and ended on 25 May. A number of controversies and scandals commenced during the election period, such as claims of legal corruption and criticisms against Christina Nowell for using non-citizens to gather votes, Luke Warren's remarks on New Eiffel's gum membership and former Prime Minister Janus Smith's remarks against the ability for non-residents (online citizens) to run for election. The results were announced on 25 May, independents Lycon and Nicholas Randouler won the election with 30.8% of the vote (4 votes).

Post-election and abdication of Zabëlle I

Main article: Abdication of Zabëlle I

Upon the announcement of his election victory, Randouler admitted his opposition of the Cupertino Alliance, however stated he would not make any attempts at revoking New Eiffel's membership of the organisation. Randouler also cited that he will "be making a document of the planned stuff we would like to achieve in the coming days." Randouler however suffered a seizure on the same day, and passed away on 3 June, having been diagnosed with a brain aneurysm. His death was discovered within the micronational community on 8 June.

Due to unrelated reasons to any ongoing crises, Zabëlle I announced his wish to abdicate on 16 June, which Zabëlle later revealed he had been considering "for a few months" beforehand. On 17 June, following the line of succession, Janus fully confirmed he would be accepting the position of Prince. Zabëlle signed his abdication letter on 18 June, which was to be made official upon Janus's coronation, which officially took place on 20 June, crowning him Janus I. Janus I granted Zabëlle the substantive title of "Duke of Hsed" after his abdication. 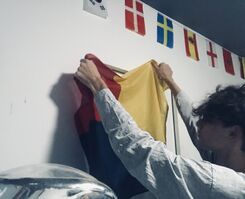 After months of attempting to find a solution with Janus, with some proposals including changing New Eiffel's territorial claims, the other residents sided with Janus and had publicly expressed their opposition to New Eiffel's claim to sovereignty.[3][4] As the decision was very impetuous and came with large opposition, Zabëlle was unable to prepare any special event, and instead wrote a heartfelt speech which was released alongside a second official document which announced the dissolution as officially being 1 November in 12:00 p.m.[5] The announcement of the dissolution came as a large shock to New Eiffel's non-territorial citizens as well as the MicroWiki community, especially since the crisis had just ended in October after nearly eleven months. Zabëlle was also largely unprepared, so the aftermath of the dissolution has been handled slowly.[3]

Inflation of the New Eiffelic Ping

Due to the constitutional crisis between late January and early February 2020, inflation for the national currency, the New Eiffelic Ping, vastly increased. Due to New Eiffel's already meek economy and inability of reliable official inflation statistics due to it being a small micronation, the exact inflation rate is not known, however it made the currency unusable.

By June 2020, the government reported that due to hyperinflation the Ping had an exchange rate of $1 to ℕ57,927, which by July 2020 grew to a massive sum of ℕ283,000. To help combat this, in early August the Official ZedBank o' Ex New Finland and New Eiffel began work on a debit card, an idea taken from Biggo Banks that was abandoned a year ago. The account would have been able to hold a maximum of ℕ300,000,000, which would have amounted to roughly only $1,060, however by 8 August the Ping was considered to be unusable, as all residents had switched to either using the Great British Pound, or to a lesser extent the South African rand and euro. The government stopped publishing inflation statistics after that, and by the last count on 9 August it was $1 to ℕ302,717.

Effects from the COVID-19 pandemic

New Eiffel had suspected cases, though none were officially reported, thus giving the total amount of cases 0, and despite this the COVID-19 pandemic still had a small yet notable impact on the crisis in New Eiffel. The first ever state of caution was declared on 12 March, further adding to the ongoing political struggle. On 13 March, the only school in New Eiffel closed, and announced it was planning on reopening in two weeks, however, did not open until the 15 April, following the minor threat imposed by COVID-19 for citizens within New Eiffel's borders. The Prince stated on 15 March that sporting events and outside travel would not be restricted for the time being, however later on 24 March all outside travel was restricted. Travel bans were lifted on 27 April with a set curfew

The Maslow Initiative was a proposed plan by Issac Richards that mandates and guidelines the Transitional Legislature into working on reforming the government system and society along with culturally enriching the nation - the initiative had a number of phases that would be implemented in a chronological order based on Maslow's hierarchy of needs. The initiative received informal approval from Zabëlle I upon a summary of the act before it was finalised; during the enactment session, Leon Montan of the Labour Party gave official assent of said act as well. Planning of Issac Richards' Maslow Initiative has been around in existence since early early May 2020 in which he proposed the idea in private conversations with Montan and Zabëlle I, in which both persons appealed to the idea; who both also appealed to a previously failed motion to create a Language and Culture Ministry also proposed by Issac Richards. A list of the idea and how it would work if initiated was publicised in the Transitional Citizens Forum on 6 May 2020; it was then met with a suggestion that a fully-fledged bill would be required for a proper vote to take place. The proper bill was finalised on 8 May 2020 and published for voting on 9 May 2020 - the same day it was voted in favour of.