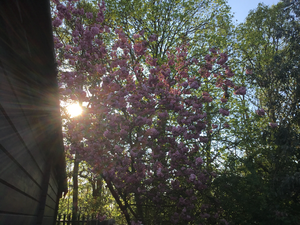 Sunset over a tree in New Eiffel

The geography of New Eiffel is unique due to the micronation's position as an urban, landlocked enclave of London, UK. With an area of 580m² (0.00058km² or 6243.07 ft²), New Eiffel has 156 meters (511 ft) of borders. New Eiffel has five structures in total. New Eiffel contains no major natural resources, and no known natural hazards other than those that affect London in general.

In general, the climate of New Eiffel is cool and often cloudy, and high temperatures are infrequent. It is often rainy in Autumn, Spring, and the Winter. Summers are generally warm, sometimes hot. New Eiffel's average July high is above 27°C. Winter is often very cold and has little temperature variation. Heavy snow is rare but light snow usually happens at least once each winter. Spring and autumn can be pleasant. New Eiffel gets a very low amount of precipitation annually. Typically, 25°C or higher is considered almost unbearable, and -1°C is worthy of a weather advisement. New Eiffel receives these weather advisements through the Cupertino Alliance weather station project.[1]

New Eiffel's terrain is very flat, and New Eiffel is in the shape of an almost perfect rectangle and consists mostly of a field and a few trees. New Eiffel is very green, and has plants everywhere, and in most houses. New Eiffel has no major bodies of water.

The nature of New Eiffel is fundamentally urban and none of the land is reserved for significant agriculture or other exploitation of natural resources. The city state displays an impressive degree of land economy, born of necessity due to its extremely limited territory. Thus, the urban development (i.e., buildings) is optimised to occupy less than 30% of the total area, while the rest is reserved for open space, including New Eiffel Gardens and a Rugbull Field.

New Eiffel has only three buildings, an attached house which serves as New Eiffel School and Jimbo's Gym, a privately-owned shed and the government home. A fourth structure, 39, 41 Bomb Shelter, is an air-raid shelter that was built in the United Kingdom during World War II. It is now an important building located in modern-day New Eiffel, where it is one of New Eiffel's national monuments. It is registered as a grade 3 building. The government home has multiple rooms, used as living spaces, parliament and ministries, as well as having the Millanian embassy[4] and a cardboard constructed Embassy of Plushunia. As New Eiffel is very small, and has no need for any airports or rail roads, bikes are commonly used. Each bike is required to be registered, which the New Eiffelic government does for free. New Eiffel has five bike roads,[5] and three streets.[6]

The government has pledged to limit New Eiffel's carbon footprint.

New Eiffel occasionally sees red foxes entering across the border, and is home to two domesticated cats, as well as occasionally the cat Ralph who is the only animal that has been banned from entering into New Eiffel. Another three to five cats are estimated to cross into New Eiffel every year. The Natural History Society of New Eiffel claims that New Eiffel has over 7 species of bird, 25 moths, and more than 30 kinds of spider. However, this number has been criticised. 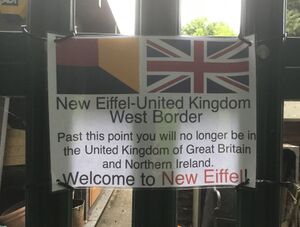 New Eiffel has 156 meters (511 ft) of borders, and is landlocked in the United Kingdom.

New Eiffel has four borders, within the United Kingdom; none of which are natural:

New Eiffel observes Coordinated Universal Time[7] (UTC; UTC±00:00), rarely known as New Eiffelic Time (NET), since New Eiffel is landlocked inside London.[8] New Eiffel does not officially observe daylight savings time, however it is de facto observed. The government of New Eiffel does not use UTC+1 when it is Daylight Saving Time when recording official meetings or court sessions, however the public commonly observes DST.