"Aardvarks on Parade" is a song that was the proposed national anthem of the erstwhile Principality of New Eiffel. The song was commissioned by Prince Zabëlle I to the composer Walker Schroeder, Chancellor of the Unitary State of Swivia, on 28 April 2019. The song was still in the planning stage by 27 December 2019, as Schroeder admitted he had unintentionally became preoccupied with other lines of work. The song was finished on 20 May 2020,[1] however due to the crisis in New Eiffel, the anthem was never proposed nor enacted into law. Although the song is fully instrumental, a lyrical version had been written and proposed by New Eiffelic statesmen Isaac Richards.[2]

The idea for the anthem to be named "Aardvark" was jocularly proposed to Schroeder by Zabëlle I in order for it to be listed high in lists of anthems in alphabetic order, as Aardvark was the "second highest letter in the alphabet" (after 'A') according to his majesty, and in response, Schroeder proposed designating it "Aardvarks on Parade" instead, as it was a brighter sounding name; this was much to Zabëlle's liking, and it was thus chosen as the new name. On 30 August 2020, the name was officially translated into seven New Eiffelic languages, though no lyrical verses were translated.

The song is composed in the key of G major, and follows a simple "A B A" structure in 4/4 time. As described by Schroeder; "B is a bit (perhaps too) whimsical and lighthearted, while A is the triumphant bit [one hears]". The song also includes a light and bouncy saxophone solo using some bent notes in the middle and incorporates triplet syncopation and the use of rising third arpeggios. Schroeder said that he wanted to make it simple, and "focused more on making something which sounded whimsical enough to be deserving of the name Aardvarks on Parade." Depending on the version, the anthem is either fifty-four, fifty or sixty seconds in duration, sometimes including a long silence after the song finishes.[3]

On 27 April 2019, Walker Schroeder, then-Chancellor of the Unitary State of Swivia, advertised on MicroWiki's official Discord, MicroWiki@Discord, that he was writing music and offering it to nations to adopt as national anthems. Schroeder further declared the following day that he only did instrumental and writing lyrics was up to the commissioner, also stating that they would "not be very long but [still] be well thought out music". He also mentioned that he was preoccupied with his education and thus, would "only compose a few [anthems]". Schroeder cited commissions were free; "Honestly I'm just trying to provide a small service to a few micronational leaders, because I recognize the lack of musicality in today’s society". Then-Prince of New Eiffel, Zabëlle I, approached Schroeder via the private messaging feature and requested an anthem, later asking for it to incorporate trumpets.

The song was still in the planning stage by 27 December, as Schroeder admitted he had unintentionally become preoccupied with other lines of work. Apologising for the wait, Schroeder stated that it would still be completed. On 20 May 2020, Zabëlle reconfirmed that he still wanted a triumphant anthem, and by then Schroeder began charging money for anthems, however, they eventually agreed that Zabëlle would pay him by offering advertising services for Schroeder's work. Schroeder later submitted a short draft to Zabëlle, which Zabëlle was highly fond of. On 21 May, Zabëlle told Schroeder that he was very delighted with the song, and praised Schroeder's work, adding "It was worth the wait." He also stated that he would attempt to propose it as the official national anthem of New Eiffel.[1]

As a national anthem

Due to the crisis in New Eiffel, which began on 14 December 2019, the Document Forming the Transitional Government of New Eiffel was signed by the Prince on 1 May 2020 and parliament became a transitional legislature, bringing a de facto government shutdown. As such, the anthem was never legally proposed nor enacted into law. The crisis eventually led to the dissolution of New Eiffel on 1 November. The anthem was, however, popular among New Eiffelians, and there had been a growing support for it to become the official national anthem. On 11 August, Zabëlle made an official recommendation to the public to adopt the anthem, which he lined up with New Eiffel Unity Day. A lyrical version was proposed by Isaac Richards on 14 August. On 30 August, the name was officially translated into seven New Eiffelic languages, though no lyrical verses were translated.[a] 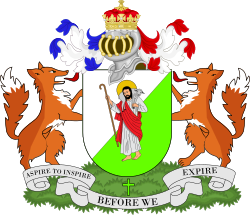 The coat of arms of New Eiffel, referenced in the lyrical version proposed by Isaac Richards

Both former national anthems of New Eiffel, "Stand tall, New Eiffel" (2019–20) and "Friendly, New Eiffel" (2018–19), infrequently had their lyrics proposed to be paired with the melody of "Aardvarks on Parade".

On 14 August, Isaac Richards, New Eiffelic statesmen, approached Zabëlle and proposed a lyrical version which he had solely came up with. The lyrics metaphorically compare New Eiffel to the mythical Phoenix, a bird that cyclically regenerates or is otherwise born again, with the lyrics symbolising New Eiffel's strength during the crisis in New Eiffel; the coat of arms is then referenced—"Holding a coat of foxes"—and the prince Janus I is mentioned alongside his subjects, "God Save the King" being stated as well. The eponymous title of the song is also mentioned twice.[4]

Holding a coat of foxes,
God Save the King,
Janus and his subjects rise again.

After tyranny and discord,
God Save the King,
New Eiffel rises again.