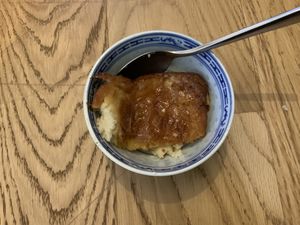 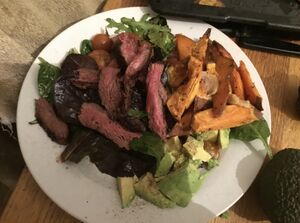 A dish being served at Smith Restaurant 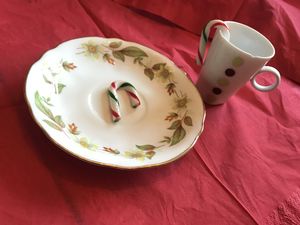 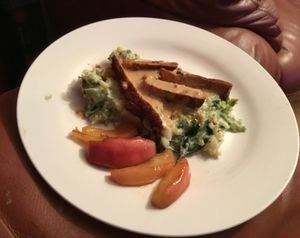 The cuisine of New Eiffel is a style of cooking and food preparation popular or orginating from New Eiffel. Due to many New Eiffelish citizens, the royal family in particular, being of South African origin, some popular dishes in New Eiffel are inspired by typical South African dishes, such as Biltong and Melktert. However, there are some dishes that come from European influences — such as New Eiffelic Tomato (Polish) and Dutch Muffins (German).

Bagels are very commonly eaten as a snack. Scones are the national dish of New Eiffel, so it comes to no surprise that they are also commonly eaten. Meat is also a favourite in New Eiffel, with many dishes containing beef and chicken. Vegan dishes like vegan burgers are also still commonly eaten, even by people who aren’t vegans.

Warm Bread (North New Eiffelian: Varmenbrott) is a New Eiffelic variant of French Toast. The dish is traditionally made with: bread, often stale, and egg. It can be topped with cinnamon, sugar, syrup, or molasses.

New Eiffelic Tomato is a traditional Tomato soup (usually served piping hot) consisting of a Tomato soup (made of Tomatoes, butter, and Celery — sometimes substituted with Leeks or Onion) along with Cherry tomatoes (traditionally 7-8 tomatoes; cut in half), a traditional New Eiffelic seasoning (generally grinded salt, pepper and sage) and sometimes Mediterranean spices. It’s known to be quite spicy and is generally more watery than most other variants of tomato soup.

Dutch Muffins (North New Eiffelian: Ikktopenlønden-mufinuj) are a bastardized recipe for Dutch baby pancakes, this recipe was accidentally made by New Eiffelian Issac Richards; who had no flour for the recipe and substituted it with Glutinous rice flour, the result was an eggy and sweet pastry similar in texture to a muffin, unlike the popover dish. The recipe is called the Dutch Muffin for looking and tasting similar to muffins.

With Christmas being an important season in New Eiffel, the Smith Restaurant usually sells special festive treats to warm people up for the holiday; a special dish is the classic Tea and Candy Cane Combo - served with two candy canes and some tea. This dish is only served in December.