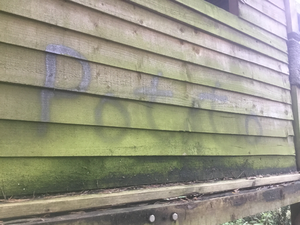 Vandalism is the action involving deliberate destruction of or damage to public or private property. Vandalism in New Eiffel commonly consists of graffiti, litter and property damage.

New Eiffel School's front right window was damaged when a brick was thrown at it. The window cost was around £200.

Litter used to be a large problem in New Eiffel in early 2018, however has since become of relatively little concern. The grade 2-listed building, 39, 41 Bomb Shelter has become more and more heavily damaged and vandalised with graffiti and litter. On 20 May 2019, the government revealed plans to restore and clean up the shelter. The clean-up of the bomb shelter took place on 12 January 2020, and was primarily done by Janus Smith. As of July 2020, litter has resurfaced as a common problem, especially within Plitvice and New Eiffel Gardens.

Graffiti is most commonly done with spray paint or crayon, however markers and paint are also used.