The flag of the Unified Royal States of Australis, also known as the Hexi-Star flag, is the current civil and state flag of Australis. The flag was designed and subsequently approved by Daniel Hamilton, the Grand Duke of Australis, on 7 July 2020. The current flag was adopted following criticism of the previous flag and better represented a change in the nation's governance from the original Pentarchy system to the nation's present form as a Grand Duchy.

Officially, the flag is blazoned as follows:[2]

The flag was flown at on a horizontal mast for two weeks in the residence of the Grand Duke in accordance with mourning procedures, following the death of Blake, one of the two national hounds of Australis owned by the House of Roscoe. 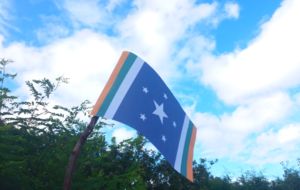 The flag of Australis flying in Brittany, France as part of the August Flag Challenge. Photographed by Florian Corre.

Throughout August 2020, the Australissian Government held a public event to fly the Australissian flag in as many locations as possible. The idea was inspired by Operation Wegstany, a similar event held in the US-based micronation of Wegmat. Eight people participated in the challenge across four countries, each from another continent - France, US, Australia and India, in Europe, North America, Oceania and Asia respectively.[3]

Flag Day is a national holiday in Australis, as specified by the Australissian Codex of National Holidays.[4] It is held annually on 7 July, to celebrate the adoption of the current Australissian flag. The first Flag Day is occurred on Wednesday 7 July 2021. The Codex further describes the national day:

Flag Day, held on July 7, is a proud day for citizens of Australis, where we come together and fly our national flag proudly, and celebrate what it means to be an Australissian. - Australissian Codex of National Holidays

Currently, just one city has an approved flag - New Yera, the capital city of Australis, located in Amicitia. The flag was designed on 28 January 2021 and implemented on 29 January 2021.

In its history, Australis has adopted two flags. The first flag, designed by Daniel Hamilton in April 2020, was hastily made with the Microsoft Windows 10 application, Paint 3D. As a result of the rushed nature of the design and the limitations of the software used to create the flag, several issues arose once the flag had been implemented. Although the flag was designed with a ratio of 1:2, it was revealed that one side was slightly longer than the other, bringing concerns about the flag's suitability for further use. In addition, it was also found that the five-pointed star situated on the left side of the flag was not correctly centred relative to the yellow half of the flag. In addition, several micronationalists pointed out that the left half of the flag constituted a violation of the rule of tincture, stating that metal should not be put on metal, with the heraldic colours or and argent, known as yellow and white respectively, being considered metal. The specific violation discovered on the flag's design was the instance of the argent (white) five-pointed star charged on the or (yellow) field.[5] As a result of this, the Grand Duke of Australis designed another flag, in line with the rule of tincture, which was subsequently adopted as the new and current flag of Australis.