The summit took place on 28 June 2019[3] in Birmingham, England, in the Guild Council Chamber at the University of Birmingham, and was organised by Emperor Adam I of Adammia, who was Chair of the Grand Unified Micronational at the time.

The summit was attended by Adam I and Lady Hermione Peace, his Minister of National Development from Adammia. Austenasia was represented by Emperor Jonathan I, Lundenwic by Lord Mike Lewis, Westarctica by Dr Kim Bryan and her sister, and New Westphalia by Lord Daniel Morris. Also in attendance were five officials from Essexia, three of whom each also represented another GUM member state (Gradonia, Aspen Empire, and Quebec respectively). 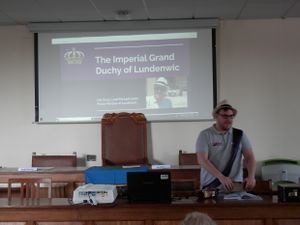 The summit saw presentations by attendees, as well as open discussions on law enforcement, international organisations, and economics.[4]

The summit was also used as an occasion for the signing of the Edgbaston Convention, a treaty aiming to ensure higher standards of accuracy in regards to the sometimes vague or frivolous claims made in the community of small nations. The opportunity was held to hold only the second in-person Quorum meeting of the GUM in history. The first had been held at the Tate Modern in July 2012, the day following PoliNation; Jonathan I is the only person to have been present at both. This in-person Quorum was primarily a ceremonial event, but did vote to refuse one membership application and to expel an observer state which was deemed "unprofessional".

The summit ended with the playing of national anthems. It was planned that a similar summit would be held next year, but these plans were dropped due to the 2020 coronavirus pandemic.