The Occitania Grand Unified Micronational membership popular consultation, 2018, also known as the Occitexit popular consultation, was taking place on 4 March 2018 in the Popular Union of Occitania to gauge support for the country either remaining a member of, or leaving, the Grand Unified Micronational under the provisions of the GUM Popular Consultation Act and the Federal Court order.

The Popular Union of Occitania joined the GUM during the summer 2017, first as "Observer" then as "Full Member". Occitania participated in many Quorum, weekly meetings of members and apparently (version denied by the federal occitanian government), the UPO and the GUM had cordial relations.

It is the Federal Court of Babougrad (Occitanian Supreme Court) that issues the mandate for the execution of an election. For this mandate to be issued, the parliament must pass a law explicitly requesting it.

On 12 February 2018, the Vergadering has voted the GUM Popular Consultation Act who asks to the Federal Court of Babougrad to organize a popular consultation. Few hours later, the Federal Court of Babougrad has published the court order which establishes both the date of the popular consultation at the 4 March 2018 as well as the question: "Should Occitania begin the process of leaving the Grand Unified Micronational?", or in french: "L'Occitanie doit elle entamer le processus visant à quitter le GUM ?". 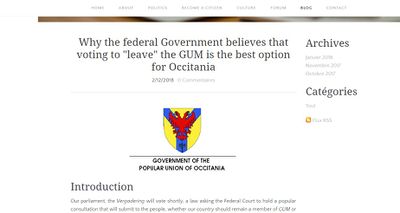 Press release of the federal government.

As a result of its legislative and government majority, the Melocoton Party issued a press release on behalf of the federal government affirming his opinion about this subject. The slogan of the MP campaign is Occitania, Yes. In the press release the arguments in favor of withdrawal are the great disappointment over the utility of the organization, the recent inactivity and occitanian marginalization in the GUM. On February 19, the "Yes Occitania" platform and the Melocoton Party shared a TV Advert.[2]

The federal government proposes as a solution to redistribute diplomatic efforts towards GUM to the Occitanian Commonwealth.[3]

Logo used in the Yes campaign

Jakub Baran, leader of the Fighting Poland party says that the "GUM is good for Occitania". Although in the Melocoton Party, Daniel Lee of Sezentrania believes the GUM is neither good nor bad for Occitania and unnecessary to leave.