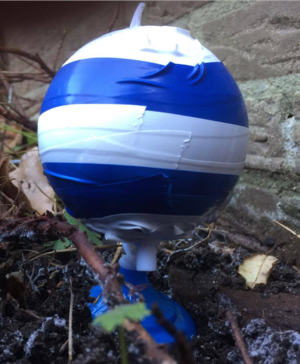 The GUM Monument offical the Grand Unified Micronational Monument also known by locals as The Globe is a national monument of Campinia. It stands in South Campinopolis, the capital of Campinia The GUM monument was planned 3 months before, But was erected at 20 January 2016 Created by a Campinian citizen Niels Hameren and officaly opened and erected by Shady Morsi to commemorate and honor the Grand Unified Micronational. for its "Influence and its Great Achievements during its existence" The GUM Monument is a globe, with ductape with the GUM-collors

The Monument was proposed as part of Operation Michelangelo an operation taken by the Home Secretary to reform Campinopolis into a city with a lot of monuments ". Plans for the monument date back to around November 2016, when it was first suggested by the Secretary of Culture. Tomek Sloekers On 8 January the monument was made, Finally, on 20 January 2017, the monument was erected and was unveiled to the public.

The memorial consists of a small globe - with white and blue ductape forming that represents the GUM logo, The monument also has lights that iluminates the monument at night. Its the only monument located in the Southern part of Campinopolis.