Campinia (Dutch:Campinia) officaly The Principality of Campinia (Dutch:Prinsdom Campinia) was an Antarctic micronation located in the Netherlands and Western Antarctica, with the residence of the Prince in Belgium. It claimed to be an independent sovereign state but received no recognition from world governments, and for this reason was often referred to as a micronation.

Campinia comes from the Latin word for campine (Kempen in Dutch) "fields" and "nia" which means land, the combination of the two words means "region of fields".

Campinia, at the time knew officially as the Grand Principality of Campinia, was created in 2000, but it fell inactive until 2010, when it was re-activated by Prince Guillaume I. In 2011, the Grand Principality was changed to simply the Principality of Campinia with a new head of state, Guillaume II. In February 2012 Campinia joined the Flandrensisian Commonwealth, not much later they became an Antarctic micronation and a member of the Antarctic Micronational Union. In 2013 Prince Guillaume II changed Campinia into a vassal of Flandrensis, not much later he abdicated the throne to Elias I of Campinia who reformed the principality into a duchy. The crisis begon in 2017 when a citizen, Shady Morsi claimed the throne, established a parlement and recruited citizens. After Flandrensis protested against this “coup d 'état”, Duke Elias confirmed that he didn't abdicate and it was all a huge misunderstanding: he sent an e-mail to Morsi with ""From me you may even lead the project, because I have not so much time." and so Morsi assumed that it was an abdication. Due to the international pressure, Morsi abandoned his claims on the Campinian Throne and entered into dialogue with Duke Elias of Campinia. Due to a lack of citizens and activty, Campinia was dissolved on 4 April 2017 by Elias.

Campinia was a constitutional monarchy since 2000, with the Prince of Campinia as head of state. The executive branch consisted of the Regent and the Grand Constable as the head of government, who presided over a ten-member Council. The Duchy was ruled by the Duke and the Council. Members of the Council of State were elected every four years

The household of the Duke:

As a monarchy, the Prince of Campinia could grant noble titles:

Campinia also has a rich history of heraldic orders: 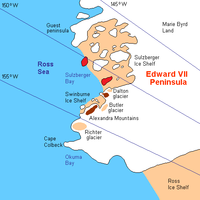 The Duchy of Campinia was located in Western Antarctica in the Sulzberger Bay. and consisted of the Islands, Moody Island and Vollmer Island. Moody Island is an ice-covered island 19 kilometres (10 nmi) long, between Kizer Island and Steventon Island in the Sulzberger Ice Shelf, Marie Byrd Land, Antarctica. It was mapped from surveys by the United States Geological Survey and from U.S. Navy air photos (1959–65), and was named by the Advisory Committee on Antarctic Names for E.L. Moody, a dog-driver with the Byrd Antarctic Expedition (1933–35)

Vollmer Island is an ice-covered island 20 kilometres (11 nmi) long, lying along the edge of Sulzberger Ice Shelf, 13 kilometres (7 nmi) northwest of Cronenwett Island. It appears that this feature was first observed and roughly mapped from aerial photographs taken by the Byrd Antarctic Expedition, 1928-30. Named by Advisory Committee on Antarctic Names (US-ACAN) for Lieutenant T.H. Vollmer, U.S. Navy, engineering officer aboard USS Glacier along this coast, 1961-62.