On 1 April 2016, Smyrna and Fitberland have created the "Co-Principality of New Occitania". This one claims to be sole representative of the territories controled by the Popular Union of Occitania. It was founded as a co-principality and the co-princes are Raul I (Fitberland) and Victor III (Smyrna). Gardeland and Entrôpia recognize the rebels as the legitimate government. During four days, the Occitan government does not respond, preferring to hide the coup. On 6 April, the rebels surrender, because of the international support to the legal government. During the coup attempt, the People's Army of Occitania had controlled 100% of the territory. Now Smyrna are recognized as a terrorist organization by the P.U.O, because they wanted to overthrow the legitimate government. Fitberland had the same status before signing the peace treaty. 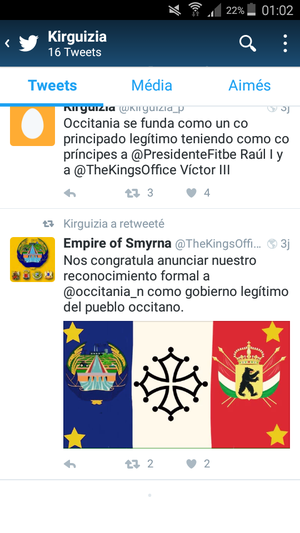 On 4 April, the union has create an hashtag on twitter, #SoiOccitania ( #IAmOccitania ). The hashtag was the mark of support for union. Coria, Cumagne, Surland and Yugarritia tweeted this hashtag.

After the coup d'état attempt

On June 4, a peace treaty was sign with Fitberland. The two nations resumed thriving diplomatic relations. On August 26, Raul Torres became the governor of the Verd Territory.

On October 16, a referendum valid a peace treaty with Smyrna.