We Could Have Invited Everyone 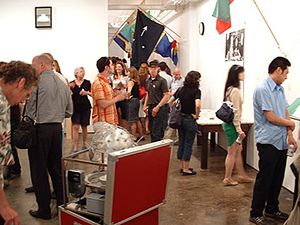 We Could Have Invited Everyone was a micronational exhibition occurring in 2004 and 2005. Both exhibitions coincided with a micronational summit.[1][2] The exhibitions featured over twenty artists' micronations, model nations and 'concept nation states',[3] featuring non-art pieces such as stamps, currency, passports and secessionist trivia. Alongside this was artwork by artists such as Yoko Ono and Nina Katchadourian.[4]

Two years after the final exhibition, the curators held an expanded event in 2007 called Grow Your Nation.[5][6]

The original exhibition was featured at the Reg Vardy Gallery at the University of Sunderland, beginning on 9 November and concluding on 17 December.[7][8] 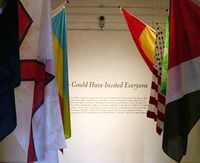 The summit was later featured in How to Start Your Own Country, a BBC television series presented by Wallace documenting the founding of the Kingdom of Lovely.[11]

The Summit was described with the tagline A General Assembly with Representatives of Real and Possible Countries. The conference itself took place at The Theresa Lang Community and Student Center. The event concluded with a party, film screening and citizenship drive at The Vera List Courtyard. Both of these locations were on the campus of The New School.[12][13]