From MicroWiki, the micronational encyclopædia
(Redirected from New Utopia)
Jump to navigation Jump to search

The Principality of New Utopia is a libertarian micronation founded in the mid 1990's by Oklahoma resident Lazarus Long, his family and business associates. It is generally dismissed by those who see Long's claims as overstated and unattainable. It is conceptually similar to several unrelated attempts at establishing sovereign libertarian city-states on man-made islands extending as far back as the 1960s, including such efforts as the Atlantis Project the Republic of Minerva as well as The Palm & World projects in Dubai.

The driving force behind New Utopia is Mr. Lazarus Long. (Prince Lazarus) He has been an entrepreneur all his life. He's now 73, "going on 43." Before he legally had his name changed, he was known as Howard Turney. As Howard Turney, (the Prince) is the former Chairman of the Board of Mayday USA, Inc., he was the Founder and Chairman of El Dorado Clinics, Was the founder and Chairman of Cryogenics Solutions Inc., former President and CEO of Cogeneration Systems International, and former Chairman, CEO of Power Resources Systems. Mr. Long was the Founder and is Chairman of The Rejuvenation and Longevity Foundation a non-profit Corporation. He is a member of MENSA, World Mariculture Society, and the International Cogeneration Society. He has received many honors and is listed in Who's Who in American Business Leaders, The International Directory of Distinguished Leaders, Who’s Who in Finance and Industry, Who’s Who in The Southwest, and The Cambridge Directory of Who’s Who, 1997 edition. The companies he has founded include food manufacturing (3), restaurants, mariculture, personal security, medical clinics, and a medical service company. (There will be a medical center specializing in anti-aging medicine on New Utopia.) He has been involved with the medical field for the last several years in the anti-aging area of medicine, and as Howard Turney had received a great deal of television exposure and travelled world-wide, appearing on television and radio shows as a spokesperson in the anti-aging field of medicine… so much so, in fact, that his name regularly appears in books and educational television documentaries on the subject. He became known within the field as “The Father of Human Growth Hormone,” due to his having pioneered and promoted its use in anti-aging medicine.

When he shifted his career path to pioneering a new country; one with a stable, free-market economy, Mr. Turney realized his name recognition in the anti-aging medicine field could be a detriment to the founding citizen’s goals in establishing the new country. He felt that it was imperative that New Utopia not be perceived as simply another offshore medical facility, but primarily as a banking and insurance center, as well as a Caribbean playground and rejuvenation clinic.

This is the reason he chose to change his name. He chose the name of Robert Heinlein's fictional character because as he was portrayed, he held similar philosophies to Mr. Turney. Of course, all of this will become common knowledge, but as he says, “It seemed like a good idea at the time, and I do not regret having taken this step, a new career path, a new name. It seems fitting.”

New Utopia is conceived by Long as an artificial island nation in the Caribbean Sea, where the use of the latest technologies and unfettered free enterprise capitalism, within a political environment founded upon libertarian principles will encourage free trade and provide boundless opportunities for its residents - all of whom would live under the "benevolent rule" of "Sovereign Prince Lazarus".

The site selected for New Utopia is an underwater reef - the Misteriosa Bank - approximately equidistant from Mexico, Honduras and Cuba, with a surface area of over 400 square kilometers with an average depth of 20 meters. 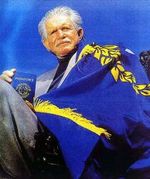 There have been serious obstacles on Long's path to fund his "principality". In Federal District Court in Oklahoma (where he lived at the time), the U.S. Securities and Exchange Commission charged that Lazarus Long was trying to sell $350,000,000 worth of unregistered bonds. Long consented to a judgment being entered against him for $24,000, but he was not required to pay these damages as he submitted a sworn statement to the Court that he was a pensioner with no assets [3]. It was subsequently found by the Court that Long had not flouted any of the SEC's rules. The whole episode put the project back a whole year. Long agreed to not countersue for damages in order not to hold up the development of New Utopia any longer.

Long's - and by extension - the project's - lack of capital have ensured that the construction of New Utopia's planned floating concrete islands remains a dream more than seven years after Long first proposed the notion. Further complicating matters is the claim that the Misteriosa Banks was previously claimed by the Cayman Islands.[1] However, "Prince Lazarus" allegedly remains resolute in his intention to create what he calls a "libertarian paradise". In adition to this, the Legal Opinion prepared by top London Barrister, Shay Lotan, lays to rest any doubts about the legitimacy of New Utopia's claim to the territory.

It has been claimed that the proposed location for New Utopia is in international waters. It has been reported that the New Utopia web site once featured a legal opinion as to the legitimacy of the territorial claim of the proposed Principality of New Utopia but this document (reportedly authored by UK barrister Shay Lotan [2][3]) is not in evidence at the New Utopia web site as of 2005-08-29. A similar unsigned document was removed from the tech-utopia.biz website, but was preserved for a time in the Google cache Template:Fact (as of 2005-09-29). The Legal Opinion document was removed by the New Utopia Government due to it's commercial sensitivity though is available upon request from the UK Pro Consuls office and, indeed, via the New Utopia main office in the states. Though the project has not been recognized as an independent state yet by the U.N. Mr. Long and his colleagues have many documents on the New Utopia web site claiming some form of legal authority after extensive research. One such document, the Constitution of the Principality of New Utopia was signed 20 July 1999. Signing the document were "H.R.M. Prince Lazarus", "H.R.M. Princess Maureen", his wife, John Howard Long, his son, T.M (Bud) Skillern, Matt Kristof, Jeffrey Schott, Jay Hopcus, Ronald Kimball, Michael McDonnough, and Richard W. Morris, who has the title of New Utopia Attorney General.

Many believe this project is actually a fantasy of Mr. Long and his friends. To date the only evidence of this "nation" coming into existence is the placing of a buoy anchored to the seabed of this submerged peak of a sea mountain range that appears to have been claimed by the Cayman Islands. A German film crew also recorded this historic event that was broadcast by ARTE television on satellite.

In the time that Mr. Long has been promoting this project, none of the construction dates have been met due to be constantly let down by developers. Reportedly, individuals have purchased bonds, passports, currency and other memorabilia related to New Utopia, although many believe there is little chance that Mr. Long, his family and associates will ever be able to obtain the extensive funding necessary to create or operate their dream.