Order of the Baphomet

The Imperial Order of the Baphomet (in Sabian: airraidaibók babametoná; initials IOB) is Sabia and Verona's highest civilian order of honor. Named after the Baphomet, it was first established by Tarik Kârjasary as Emperor of the Second Berinese Empire. After the fall of the Empire, it was forgotten for some time until the government of the Artaghe revived it, only to fall inactive once again with the disestablishment of Artaghe. It was revived a second time by the Sabioveronese government under Napoléon Bleuberrie in 2013.

The Order has been awarded by six different heads of state belonging to different governments, as a result of the instability of the Valtir Sector. The order may be conferred posthumously, though so far no cases of posthumous awards have been seen.

The Order was created by an Imperial Decree of Tarik Kârjasary as Emperor of Berin on 20 April 2012. The Order became the largest institution of the Second Berinese Empire. The Berinese Monarchy was weak and the Empire soon fell apart. In sight of the friendship of the former Berinese Emperor and the then Crown Prince Jonathan of Austenasia, what was the "Empire of the Great Berin" became New Balland, a subject to the Austenasian monarchy that was led by Declan I, II & V at the time. During this period of time and until the formation of the Union of Artaghe, the Order remained inactive. In Artaghe, the President of the Union leads the Order. First Runa-Lisandra Bartolucci focused in Artaghean nationals and when Aina Oehler assumed office, the award became a diplomatic convenience. Artaghe's internal affairs were however uncapable of maintaining stability, and the office of the President was replaced with the "Union Presidency". The Union Presidency was composed of three members. Only one Union Presidency ever served; it was composed of Liam Barnard, Oehler and Kârjasary, the once Berinese Emperor and former representative of New Balland. Finally, the Union of Artaghe was disestablished and Kârjasary takes control of the region again. The Order falls into inactivity for the second time and remains this way until the formation of Sabia and Verona within the Kingdom of Juclandia. This time, the Order is revived by Napoléon Bleuberrie, who sought an award for his fellow members of the Socialist Party. In Sabia and Verona, the Order is subject to strict laws regarding awards and decorations, and achieves a relative stability for the first time in its history. During Sabioveronese Prime Minister Ann Stefanović's administration, the Order passed to be responsibility of the Governor of Sabia and Verona. In 2014, the Order's head became the Monarch of the Valtirians.

There are only three ranks of the order. They have remained the same since the Order's establishment in the Second Berinese Empire.

The ranks have no real insignia, between themselves nor as for the Order itself. In case of being necessary, a tricolour ribbon (with the old Artaghean national colours, blue, red and white; or black and yellow) with the Baphomet Seal in the centre shall be used. 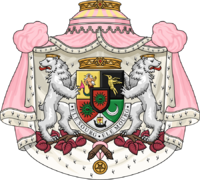 Imperial Seal on the royal arms of the King of the Valtirians.

The Order is represented by the Imperial Seal of the Baphomet, which was Coat of Arms of the Monarchy of the Second Berinese Empire. Although the Berinese Empire fell apart and the monarchy was disestablished, the seal remained the emblem of the Order. The colour of the Order is Crimson red, but it may also use yellow, white and black as secondary colours. Ribbons of the order have been black; blue, red and white; and currently only red, as it was first intended.

Grand Knights of the Order

Commanders of the Order

Officers of the Order

The Maestre of the Order (Sabian: aiakrí airraidaibokinnán babametoná) is the head of the Order, in charge of bestowing the honour to whoever they deem worthy. Throughout its history the Order has been awarded by several different heads of state, ever since the creation of the Order in the Berinese Empire to its modern times in Sabia and Verona. The Maester is formally referred to as "Lord / Lady Maestre of the Imperial Order", although in practice only "Maestre" is used. This is reflected by the King's official full title, "...Maestre of the Order of the Baphomet...".