Politics of Sabia and Verona

Executive power is vested on the Monarch, who by constitutional mandate "delegates" it to the Government of Sabia and Verona (kuragi), presided over by the Prime Minister (kuragikurág; officially "Chief of Government"). In practice, this means the Government excercises most of the executive power in the Kingdom. Legislative power is vested in the unicameral parliament (atanói), whose members are democratically elected on a yearly basis. Members of the judiciary are nominated by the Government, confirmed by the atanói, and formally appointed by the monarch. The highest court of law in the Kingdom is the Supreme Court (raitoanobók), which consists of three judges called magistrates, and chaired by the President of the Supreme Court.

The Sabioveronese monarch, currently Tarik of Kârjasary, officially bears the title of "King or Queen of the Valtirians" (rai valtirgeninnán). They are the head of the Sabioveronese State, symbol of its social, political and cultural unity, who arbitrates and moderates the regular function of governmental institutions, and assumes the highest representation of Sabia and Verona in international relations and within the Federal Union of Juclandian Lands. The Constitution dictates the person of the Monarch is to be considered sacred and inviolable.

The Monarch is elected in open elections known as the royal elections or the royal decision, from among the candidates enrolled in the Book of Electors (ideragiħuro), a tome edited exclusively by the ruling monarch.[1] The institution of the Book of Electors has existed since at least 2014, but its constitutional role was only formally established in the Constitution of 2017. Although three monarchs have ruled Sabia and Verona so far, only once has there been a royal election: on 23 February 2014, when the people of Sabia and Verona chose Isadora of Annenak as their first autonomous, Sabioveronese, Queen of the Valtirians, succeeding the King of Juclandia Ciprian I, who had ruled the Kingdom as an overseas territory of Juclandia before the establishment of the FUJL. King Tarik, who was crowned in 2015 shortly before the execution of the Haronos Plan, became King by lack of any other suitable candidate.[2]

In practical terms, their duties are mostly ceremonial, and constitutional provisions are worded in such a way as to make clear the strict neutral and apolitical nature of their role. The Monarch does not have supreme liberty in the exercise of the functions granted to them by the Constitution; all of these are framed, limited or exercised "according to the constitution and laws", or following requests of the executive or authorizations of the legislature.

The Monarch is the commander-in-chief of the Sabioveronese Military, currently comprised of a single unit, the National Guard (dogasennañ). Unlike most of the monarch's political duties, royal authority over the Military is considerably high; and they do not need approval from Parliament to mobilize the military. They do however, need the parliament's (and the prime minister's) consent to declare war on another nation. This particular scenario is also unlikely since military conflict between nations is officially sanctioned by the FUJL's administration, and the federation is a notable follower of a strict neutral policy.

The prime minister and government

As per constitutional convention, the Monarch has to delegate their powers to an elected official, who is known as the Chief of Government (kuragikurág), but who is more commonly known in English-language source as the Prime Minister of Sabia and Verona. The system by which the Prime Minister is elected has changed numerous times since the office was established in 2012, but the office's position as head of government of the Kingdom was remained unchanged. In this sense, the Prime minister has the authority and responsibilities of a head of government in other parliamentary democracies.

Only an MP that has received the Monarch's mandate to form a government may present a government proposal to Parliament. By convention, prime ministers are the leaders of the party that wins the most seats in Parliament after an election, however, any sitting MP may receive the King's mandate.[3]

The Prime minister, in turn, delegates many of their powers to a council of ministers known as the Government (kuragi), but also commonly called cabinet or cabinet of secretaries. The government is composed of ministers known as the Secretaries (asurkág) who lead offices known as the Divisions (itrañ). The number of secretaries a government may have is up to the PM. A PM who has just been elected has the duty to present a "government proposal" before the Parliament, who in turn votes in favour or against it. If the party of the PM has a majority in Parliament, the government may be composed of members of the majority party only; this has been the case ever since the de facto establishment of a two-party system in Sabia and Verona. Any government secretary may be subject to a vote of no confidence by Parliament; in case the prime minister themselves loses a vote of no confidence, their entire government will be affected. The Constitution establishes a 15-day term limit between a positive vote of no confidence and fresh elections.

From the establishment of Sabia and Verona in 2012 to the adoption of the Constitution of 2017, the prime minister also acted as speaker of the Parliament; since 2017 the legislature has been presided by the President of the Parliament (tairág).

The second Cerwyn cabinet took office on 28 May 2020, after being confirmed by the sixth Parliament of Sabia and Verona, elected at the 2020 general election. It was formed by Apollo Cerwyn, leader of the Democratic Party.[4] It is officially known as the 13th government. It is the fifth cabinet to be formed under the Constitution of 2017. Presently, the government is composed of the following divisions:

The unicameral Parliament (atanói; meaning "assembly") is the legislature of Sabia and Verona. Members of the Parliament (known in Sabian as atanoiagi) are elected employing the closed party list proportional representation with the D'Hondt apportionment method from multi-member constituencies that use the same borders as the central regions (all of which are in the Southern Territories), which unlike the autonomous regions of the Northern Territories are directly administered by the central government.[5] The authority of the Parliament, however, is still in force in the Northern Territories and the legislature can topple any law passed by the Northern regions' Legislative Assemblies. In this sense, the Parliament represents only a portion of Sabia and Verona's population but still has say over the entire Kingdom.[6]

Opposition forces are usually led by a Leader of the Opposition, whose position is not mentioned in the constitution or any law, but has existed de facto since the formation of Sabia and Verona.[7]

Distribution of seats in the Sabioveronese Parliament after the 2019 election.

The election resulted in a landslide victory for the ruling Democrats, while the Liberals suffered their worst election since March 2014. Having surpassed the threshold of 12 seats necessary to form a government, Cerwyn and the Democrats were able to form the 13th government of Sabia and Verona, confirmed at the inaugural session of the 6th Parliament held on 28 May 2020.[4] 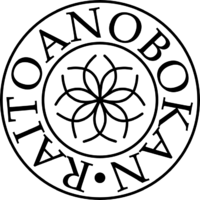 Seal of the Supreme Court of Sabia and Verona.

The judiciary of Sabia and Verona is made up of a number of courts of law (toanoboki), which are organized by geographic boundaries and in a strict hierarchy. There are presently three "judicial tiers": the district courts, which hold jurisdiction over the centralized regions (Alios and Gonn), the courts of appeal (of which there is presently only one, covering appeals from both Alios and Gonn), and the Supreme Court of Sabia and Verona (raitoanobók), which is the highest judicial authority in the Kingdom and the head of the judicial branch of the Sabioveronese state.[8]

The Supreme Court, as it stands today, was established by the Constitution of 2017.[9] The first specialized judicial body in Sabia and Verona was the Regional Committee for Democracy and Stability in Sabia and Verona (later renamed Commission for the Preservation of Democracy), commonly known as the DMDK, created by the Karasal Treaty signed in 2012.[10] Following the creation of the Federal Union of Juclandian Lands, the Judicial Power of the Courts, a commission made by the Court's Senators and five Chamber of Deputies members, became the Kingdom's new judiciary. This arrangement was not particularly popular among the provincial citizens of Sabia and Verona, who saw the preference of federal Senators over provincial Deputies unfair. The Judicial Power of the Courts never actually preceded over a case, and when the 2014 constitution was replaced by the new 2015 one, the body, alongside the Legislative Courts, became obsolte.

The Constitution of 2015 divided the Sabioveronese state into the Executive Sounos, the Legislative Sounos and the Judicial Sounos, the last of which was composed entirely of the simply named "Tribunal".[11] The Tribunal was originally to be composed of three members. Mei Xiongmao, Dimeros Grenouille and Airios Gouraesy were elected by King Tarik as the first Justices of the Judicial Sounos, with Xiongmao serving as the first Chief Justice.[12] The adoption of the Constitution of 2017 reformed the entire judicial system in Sabia and Verona, and dissolved the Tribunal to replace it with the Supreme Court and a number of inferior courts in the central regions: the Courts of Appeal and the District Courts. Three magistrates were appointed to the Supreme Court by the 3rd Parliament of Sabia and Verona: two-time Prime Minister Léon Jens-Galieri, Anton Schubert-Moss, and former Chief Justice Mei Xiongmao.[9]

Sabia and Verona's top-tier subdivision type is the region (Sabian: akurekói; Lycene: veedrax). There are currently four regions in Sabia and Verona, as well as the City of Alios which counts with region-level precedence. Initially, they were two regions alone (the Region of Sabia and the Region of Verona), but in 2014 the neighboring independent nation of Lycem became the Kingdom's third region. After the execution of the Haronos Plan in 2015, the Region of Gonn and the City of Alios became the other two top-tier subdivisions of the Kingdom. 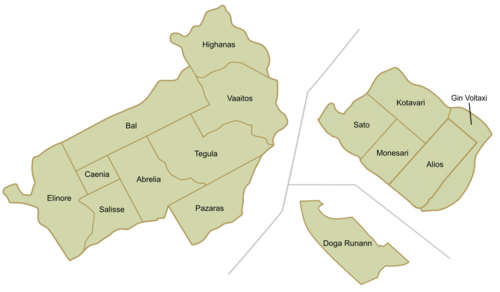 a: Most of the Gonn Region's territory consists of the Doga Runann nature reserve, which acts as a dependency of the region. Without Doga Runann, Gonn is 63.04‬ m2 in size.