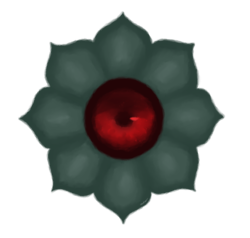 Eye of Darmo, sigil used by the House of Karjasari during their rule over the Lycene Freehold.

Darmo (in Lycene known as Daemon) is the main god in Valtirian mythology, identified as the god of fire, warmth, and the sun, and the consolidated ruler of all other gods as aiħretakrí ("great keep master") of the Ñemonħret, the thousand-door fortress where most of the Valtirian pantheon dwells. Most existing texts in Valtirian mythology feature him as either a protagonist or a playing a major role in the development of various events.

In addition to being the lord of fire, which is considered the most important element in the culture of Lycem (where Valtirian mythology originated), Darmo is described as being the origin of the sun, which is in reality his right eye that he took off to watch over the Earth, and is carried around the sky by his daughter Vesro, nicknamed the Sun-bearer.

He is generally depicted as a severe-looking man with a thick black beard and moustache, with large black wings and a single red eye on his face, in addition to a black eye on his right palm and a blue eye on his left palm, belonging to his siblings Nañvo and Sidu respectively. Personality-wise, Darmo is characterized as being ill-tempered, hot-headed and prone to sudden mood swings. As supreme ruler of all gods and men, he expects all beings to bow down to him in subserviance, and he punishes heavily those who even dare suggest he is inferior to anyone.

Darmo was born on the second eon of universal existence, as the second son of Father Širva and Mother Midra after Sidu, who was born on the fist eon. Širva and Midra, twins by birth, were the children of Time itself, and the first beings to ever inhabit the universe. After engaging in intercourse with Širva, Midra bled from her insides and gave birth to Darmo, who then presented to his parents the Great Primordial Flame (airrainsi). The Great Primordial Flame warmed Širva Xirva when he felt cold, so Darmo was named lord of all fire and warmth.

An eon after his birth, Širva and Midra's third child, Nañvo, was born. Sidu, goddess of water, Darmo, and Nañvo, god of knowledge and clairvoyance, were named "Princes of the Universe" (orasiravekái) by their parents, who materialized Bašorasorga, the jade-forest-upon-the-hill. The three siblings would then enter a forty seven-year fight to decide who would control Bašorasorga, and in the end, Darmo was victorious. Upon defeating his siblings, Darmo took Nañvo' left eye and Sidu's right eye, and incrusted them into the palms of his hands. He then erected the Ñemonħret, for all the gods to live in.

Due to his importance, Darmo counts with many names, nicknames and titles that he and others use interchangeably. Some of these include:

Darmo is the father of hundreds of children, both gods and demi-gods, most of which he has had with direct relatives, either siblings or his own children. He is married to Idno, one of his six daughters with Sidu, his older sister. With Idno he has five children. In addition to these, he is described as engaging in numerous liaisons with other godesses, often resulting in the birth of lesser gods. He also had children with mortal women.