The groxi is officially pegged 1:1 to lollipops using the "lollipop standard" (káridos jousitrinas, KJi).[1] Since its successful entrance to the Sabioveronese market, it has become the first fully functional currency of Sabia and Verona.[2] 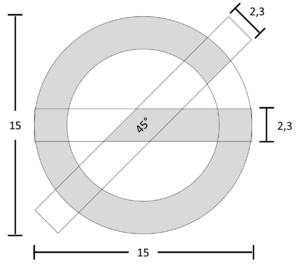 Attempts at establishing a Sabioveronese currency have been made as early as 2013, when the government of Napoléon Bleuberrie announced it was planning on entering the lyre to the Sabioveronese market by early 2014. The project taken over by Ann Stefanović and her administration after the interim government of Rubén Hernández under the banner of the apira,[3] which counted with improved designs and lower denominations (the lowest lyre denomination was 1000, while the apira's was 1).[3] However conflict in neighbouring Venezuela and the poor infrastructure in the hands of the Sabioveronese government at the time meant there weren't enough resources to fully adopt the currency as expected. By the end of the year, the project had been completely abandoned.

In November 2015, Prime Minister Shounn Virny announced alongside the creation of the National Bank of Sabia and Verona a project for a new Sabioveronese currency, which would be used mainly in the new claims of Alios and the Gonn Region, with the possibility of its use in the Northern Territories being considered. Shortly after that the designs and semantics of the currency were unveiled by the Prime Minister, who stated the adoption of the groxi, as the new currency would be known, was "a big step towards economic sovereignty in Sabia and Verona".[1]

The first series of the groxi banknote is titled "Icons and Biodiversity"; the banknotes were designed by the Sabioveronese design firm RA&V Artworks.[1]