From MicroWiki, the free micronational encyclopædia
(Redirected from Juclandian leu)
Jump to navigation Jump to search

The avo (ISO 4217 code JCA) is the national currency of Juclandia. It was introduced on the 1st of July 2018, replacing the leu. The avo is a fully digital currency, and the Bank of Juclandia no longer issues banknotes and coins. It is the preferred currency of use in the region of Jucăreni, while in Lenia the Romanian leu is more widespread. However, the Juclandian government no longer recognises the Romanian leu as legal tender, and all transactions in hard currency are now done using the euro.

The leu ([lew], plural lei [lej]; ISO 4217 code JCL) was the currency of Juclandia from 2006 to 2018. It had been subdivided into 20 bani (singular ban) before the subdivision was abolished in June 2014. The leu was originally introduced in 2006 as the SSDR leu, but its use became widespread after independence, in 2008. 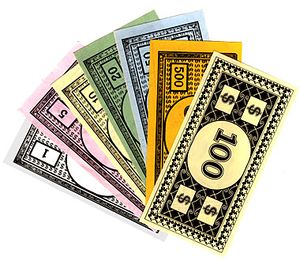 In 2006, when the leu was officially introduced, Juclandia lacked a printing plant so it was impossible for the government to get a proper series of currency. In response, the Ministry of Finance declared that Monopoly money would be used as legal tender with a special stamp on them, on which is was written "LEI SSDR" (SSDR leu, SSDR coming from the "Socialist Democratic State of Romania", the official name of Juclandia at that time).

As of July 2012, the Juclandian Leu is fully convertible with other currencies. The adoption of the 5 J£/1 RON rate has paved the way to a considerable amount of foreign reserves, thus the Leu becoming freely convertible at any time anywhere.