The Liberal Alliance was a liberal party in Juclandia. It was formed in 2011, after the National Liberal Party, the Liberal Democratic Party and the Ecologist Party decided to merge. After the merger, the party became the third largest in the country.

The party was divided between a center-left and a center-right faction for most of its existence. However, it was gradually abandoned policies considered to be on the right-wing in favour of centrist Social liberalism.

As a result of the complete overhaul of the Juclandian political system between 2013 and 2015, the party was dissolved on 7 June 2015 and merged into the Popular Unity Front. 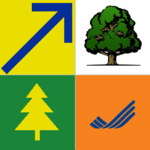 The former logo of the party

The roots of the party date back to 2008, when the centrist faction in Juclandia was divided between several little parties, among them the National Liberal Party, the Liberal Democratic Party, the National Peasants' Party and the Ecologist Party.

In 2009, the Liberal and the Peasants' parties decided to merge, and formed together a bigger party called the National Liberal-Peasants' Party, that had 3 members in the then-25 members unicameral Great National Assembly. Throughout the year, the PNL-Ț successfully managed to have the Ecologist Party merged into it, and a National Liberal Ecologst Party was formed. It was fighting to become the largest centrist party with the Liberal Democrats and the Christian Democratic Union. The Liberal Democratic Party, also founded in 2008, was the largest centrist party at the time, but after the PNLER was founded, its rank was being threatened.

At the January 2010 elections, the centrist parties in Juclandia suffered a defeat to the left-wing and right-wing parties. With only 7.7%, the Liberal Democratic Party lost its importance in the Great National Assembly, and the PNLER (with 11.5%) was suffering from internal factions disputes. With the imminent threat of being left in obscurity, the PLD and the PNLER decided to merge. The next elections in 2011 showed that the merge was well-received by the population: the Liberals got 23.3% of the seats in the Great National Assembly, at par with the Socialists, and the other centrist party, the Christian Democratic Union, won 10% of the seats. Since then, the party was renamed two times: to Liberal-Democratic Ecologist Party in February 2011, and to Liberal Alliance in 2012.