Napoléon Bleuberrie as Prime Minister, in 2012.

Bleuberrism (Sabian: bruñberrimedán; Spanish: bleuberrismo) is a political and economic theory developed by Napoléon Bleuberrie, former prime minister of Sabia and Verona, and instituted over his two terms as head of government through the Sabioveronese Socialist Party, from 2012 to 2013. 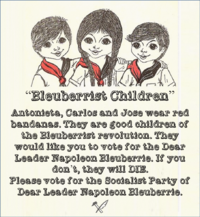 Bleuberrist propaganda made ahead of the May 2013 general election.

Bleuberrism draws heavily from socialist and communist thought, especially from Karl Marx's dialectical materialism and historical materialism, as well as a firm belief in the achievement of state ownership of the means of production in the framework of a constitutional democracy. In this sense, Bleuberrism can be considered a form of democratic socialism with highly localized aspects and interpretations.

Controversially, Bleuberrie drew much inspiration from Juche aesthetics to prop up his Socialist Party, leading many to misinterpret the true nature of Bleuberrist thought as an authoritarian or totalitarian form of communism.

Bleuberrism focuses on a strong sense of Sabioveronese nationalism – officially called regionalism during Bleuberrie's premierships, as Sabia and Verona was still a Juclandian overseas territory, self-reliance, and the "four pillars": four aspects developed by Bleuberrie himself with the ultimate goal of gaining the "emancipation of plushkind through socialism".

While on the other hand, Nel Bleuberrism's four jafáriky as explained by Léon Galieri are: