Flag of Sabia and Verona

The flag of Sabia and Verona (Sabian: simorán), commonly known as the Treteté (tretetená) was officially adopted by Sabia and Verona on 20 October 2012, when the Kingdom was created. It can trace its origins back to the Nemkhav Republic of Berin, when an early version of the flag designed by Tarik Kârjasary was adopted by the Republic's provincial government. The flag was also used by the short-lived Federal Union of Cizland in April 2012.

In addition to the Treteté, another popular flag in Sabia and Verona is the usu i arru, which is currently used as the national ensign and war flag of the Kingdom and derives from the flag of the Holy Dussesh Empire. Its distinctive pastel pink and white colors are considered the co-official national colors of Sabia and Verona, and are commonly associated with the Valtirian Monarchy. 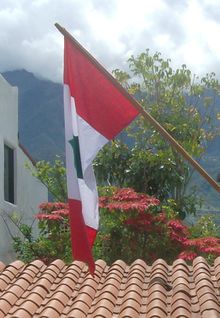 The treteté in the city of Alcabala, Bal on 20 October 2012, raised to announce the creation of the Kingdom.

The first usage of the treteté was in September 2011 as the flag of the Republic of Berin, a province of the then Nemkhav Federation. The red intended to represent courage; green represented nature and the mountains surrounding the Valtir Area, and white represented peace and equality. The seven-pointed star represented the seven original countries of the Cizlandeese Empire: Salisse, High Cizland, Low Cizland, New Merida, Soberbia, Vadenbourg and Luftchen. The name "Treteté" allegedly comes from the Albanian "tre shtatë", literally meaning "Three-Seven" and reffering the three bars of the flag and seven points of the star. The flag's original run in Nemkhav Berin was from 18 September to 9 November 2011, when the Republic of Berin was dissolved and The Faryar was created.

It was proposed that Trinitagua, a nation-project walking hand in hand with Tiana that never came to be, adopted the treteté flag. But when the Principality of Montriac was created, all plans regarding Trinitagua were forgotten and the flag was left alone. The treteté was again adopted by the short-lived Federal Union of Cizland in April 2012 to conmemorate the seven provinces of the First Cizland. However the Federal Union didn't last long and it was mostly fantastical in nature.

After the Empire of Würdigeland failed to settle in Venezuela through the Colony of Listva, the Kingdom of Juclandia set eye on the Valtir Area. Sabia and Verona was founded on 20 October 2012. Two days earlier on 18 October the Courts of Sabia and Verona held their first meeting, where it was decided the treteté would be adopted as the new nation's ensign. On October 20 the flag was raised in the city of Alcabala, in the east of the Bal Prefecture. Later, the Sabioveronese government would finally regulate the flag's proportions, something past governments employing the flag had failed to do.

The Constitution of Sabia and Verona states, regarding the national flag of the Kingdom:

The national flag of the Kingdom of Sabia and Verona will be a banner with the proportion of 1:2, with a Canadian pale of red, white and red, and with a green obtuse seven-pointed star in the centre.

The colours of the flag are a subject of debate. Traditionally the red and the green have been bright and they're often represented as such in materialized depictions. However, the Government has preferred to use paler and less saturized colours for the sake of graphic harmony. In 2015 the Sabioveronese government regulated the colours as being white, fire engine red and bottle green.