In this traditional Sabian name, Baškarivái is the matronymic and Marlarienn is the family name.

Before becoming a mainstream politician, Marlaryen was a Pashqari rights activist and served as leader of the Pashqari People's Party from 2013 to 2014. In 2015, he joined the National Artists' Guild, but later became a member of the Liberals in 2018.

Shassel Marlaryen belongs to the influential apple dragon Marlaryen family, a Pashqari family with roots in Verona. The Marlaryens, also known by the Pashqar honorific Ashaqür, were at the forefront of the Pashqari people's rights movement in 2013 and 2014. During his early involvement with politics, he was known by his Pashqar name, Shzël Ashaqür. The Marlaryens held many important positions in Verona before Haronos. Shassel graduated from the University of Elinore in 2014, with a degree on botany.

Marlaryen's career started as a Pashqari rights activist in Verona. Originally settled in Tegula, Shassel followed his brothers Daro and Obrim in the campaign to get the government to recognize Pashqar as a national language alongside Sabian.[1] After the recognition of Pashqar as a national language in June 2013, Marlaryen became one of the leading figures of the Pashqari movement and, under his leadership, it became organized into the Pashqari People's Party (PMM), formed to contest the September 2013 election. In July 2013 the Progressive Coalition was formed to rally anti-Bleuberrist parties behind Initiative for Democracy leader Ann Stefanović; though the PMM didn't have a defined stance on the Bleuberrist legacy, the Coalition and the PMM were both in favor of furthering Pashqari rights.

At the 2013 election, Marlaryen was elected as member of the Courts to represent Tegula. He was one of the three PMM legislators elected. At the March 2014 general election, the PMM nominated Marlaryen as their PM candidate once again, and though in the end their vote share increased by 4 p. p., the new electoral system implemented with the Constitution of 2014 made the party lose one of its legislators in the new Chamber of Deputies.[2] Marlaryen resigned from the PMM's leadership the day after the election, and was succeeded by longtime collaborator Lukas Pondstone. Marlaryen was re-elected in his district of Abrelia II Adshaidogaz in the September 2014 election, and was one of the 20 deputies whose mandate was cut short by Bertrand Rivière's unconstitutional shutdown of the Courts in July 2015.[3] In 2014, he designed the flag of Verona, to represent the Pashqari roots of the region. 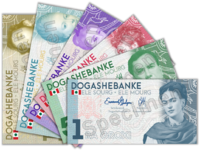 In 2015, Marlaryen was one of the selected Valtirians who took part in the ambitious Haronos Plan, which sought to colonize new territories beyond Sabia and Verona in order to expand the Kingdom's territorial and cultural influence, and to escape from the social and political decline of neighboring Venezuela.[4] Upon arriving in Alios, Marlaryen was one of the initial founders of the National Artists' Guild, a new political force led by Shounn Virny and formed by former members of the Left Alliance and the Convergence Party. After the Artists' landslide victory in the 2015 election, Virny, now Prime Minister, named Marlaryen as Secretary of Commerce in his cabinet. It was under Marlaryen that the National Bank of Sabia and Verona was founded, and the groxi was implemented as the Kingdom's currency.[5][6]

After the 2016 general election, the Artists entered in a coalition government with the Left, and Marlaryen was displaced from his post by Snø Jens-Galieri. This strained the relationship between Virny and Marlaryen, who eventually left the party. When, in November 2016, the Unity Party adopted its new charter and became the Liberals, Marlaryen joined the party. In the Constitutional Assembly, Marlaryen caucused with the Liberal plurality.

In the 2017 general election, Marlaryen was the third candidate in the Liberals' Gonn list, and was elected. He was then named Secretary of Botany in Noa Dargany's first government, succeeding Dovedán Pashor.[7][8] Major topics of his administration of the Botany Division included the extension of Sabia and Verona's green areas and the protection of the existing ones. His administration, however, has been criticized (alongside the rest of the first Dargany government) for inactivity and failing to deliver on promises.[9] Marlaryen was re-elected to his seat in Parliament in the 2018 general election, and remained in his position in the 10th government, in addition to succeeding Andrew Blackhorse as Secretary of Welfare.

In 2018, upon Blackhorse's victory in the Liberal leadership bid, Marlaryen replaced Simor de Jena as Deputy Leader of the Liberals.

Marlaryen is a member of the Veronan Pashqari minority; he was a speaker of Pashqar until the language's discontinuation. He became a member of the Pashqar Language Authority in 2014, and was one of the authorities who declared the language extinct in 2015. Marlaryen is a practicing Pahunist and belonged to the Fäkhist school of Pahunism until the schools were reunited with the Aytana Edict of 2014.[10]

He is rumoured to have dated Democratic Party leader and later Prime Minister Apollo Cerwyn.[11]