The National Artists' Guild (Sabian: dogasarabók niragarannán), commonly known as sarabokán ("the Guild") or by its acronym DSN, was a social democratic and magic nationalist political party in Sabia and Verona. It was founded by participants of the Haronos Plan in 2015, and was, during its existence, one of three active political parties in the Kingdom, alongside the Liberals and the Democrats.

In its later years, and especially following the accession of the 8th government led by Virny in coalition with the Left Alliance, the party declined in popularity. Virny's gaffes and the increasing accusations of corruption against party members led to it becoming the smallest party in the Kingdom after the 2017 general election. The party was dissolved in 2018 following the loss of Orion Bennet in the prefectural election in Sato and the poor result of the 2018 parliamentary election.

The National Artists' Guild was founded on 26 August 2015, a day after the foundation of the city of Alios. The party was founded by Sabioveronese settlers, who had arrived as part of the Haronos Plan and had founded Alios to serve as the Kingdom's new capital. The party was founded by members of the Left Alliance and Convergence and Amity, prominent parties in the northern territories of Sabia and Verona, who wished to distance themselves from what they saw as the "old régime". This rhetoric of a "new Sabia and Verona" became a prominent part of the party's discourse. The Guild presented itself as a protector of the arts and a cultural institution as well as a political one. At the party's first congress, the Artists elected Shounn Virny as their leader -whose title became "Chief Artist of the Guild"- because of his status as a newcomer to Sabia and Verona; he had just acquired Sabioveronese citizenships a couple of weeks before. Virny's speech at the congress, titled "Sabia and Verona can be different", was treated as "groundbreaking" and "inspiring" by the party's media.[2]

The party was fast to take control of the Kingdom's politics, most political circles swore allegiance to the Guild. Most of the people in Alios had taken a liking to the party, and as the city now dominated the Kingdom's politics due to the system adopted in the new constitution, the party unofficially became Sabia and Verona's "ruling" political organization. On 12 September 2015 the Guild published the first edition of Sourg ê Mourg, its official newspaper, which became the first Sabian language newspaper in the Kingdom.

At the 2015 parliamentary election, the Artists won 7 out of 10 of the new parliament's constituencies, and Virny became the Kingdom's 7th Prime Minister.[3] In November 2015, the Guild became an official member of the Valtirian National Party through the Treaty of Kotavari with the Left Alliance and Bakinn.[4] However, the Treaty of Kotavari soon fell when Convergence (by then renamed as Bakinn) merged into the Left Alliance and the latter chose to run in the 2016 election against the Guild. 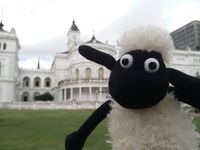 Virny in La Plata, during his controversial visit to Argentina in January 2017.

In the 2016 election, the party suffered great losses as it lost its supermajority in Parliament and became the second-largest party, with 20% less of the support it had enjoyed in the previous year's election.[5] However, the party was able to retain its influence by entering in coalition with the Left Alliance, making Shounn Virny the first Prime Minister in Sabioveronese history to form two governments in a row with the formation of the Second Virny cabinet on 1 October 2016.[6] Virny's second term was not as smooth as the first, though, as he soon clashed with the Left over the issue of constitutional reform.[7]

Constitutional reform became a major point of disagreement within the party, which split into those who supported the reform ("reformists") and those who didn't ("constitutionalists"). Tensions increased when it was agreed there would be a referendum to finally decide what to do; the party's official position, as stated by Virny, was against the reform (the 'No' option in the referendum).[8] However, many inside the Guild supported the reform, and this division ultimately led to the overwhelming victory of the 'Yes'.[9] Following the referendum, Virny stepped down as party leader, making way for Deputy Leader Snø Jens-Galieri (a reformist) to take over.

At the 2017 general election, the Artists received 17.6% of the vote and only four seats in Parliament, reversing their position with the Left Alliance, which came second and receive d six seats. Apollo Cerwyn became Leader of the Opposition as the Liberals formed a single-party government; the Artists allowed the government to be formed in exchange for some concessions, but remained in the official opposition.

Internal conflicts kept appearing in the party. The Jensist faction (led, naturally by Snø Jens-Galieri), which controlled the party's leadership but was underrepresented in Parliament, hoped to align the party with the Left and vote with the opposition, while the Virnyists, who controlled three of the party's four parliament seats, became closer with the government.[10] The crisis was exacerbated when Alios governor Étienne Boulin, a Jensist, defected the party. In the following days, Jens-Galieri resigned from the leadership.[11] Following this, the party's helm was taken over by Harmê Bertram. At the August 2017 Artists' Vetha, Orion Bennet was elected to be the party's leader.

In October 2017, at the height of tensions between the Jensists and the Virnysts, the Jensist faction splintered from the Guild to form the "Socialist Caucus", which did not register as an official party.[12] The Caucus, led by Jens-Galieri himself, denounced Bennet's leadership and went on to merge with the Left Alliance to form the Democratic Party, led by Apollo Cerwyn.[13][14]

Ahead of the 2018 general election, polls suggested a resounding defeat for the Artists, as they continued to plunge further down while the newly formed Democrats and the Liberals rose to fight each other for popular support. On 14 February 2018, following the release of a TID poll which predicted a 6% vote intention for the Guild, Orion Bennet resigned from the party's leadership after only six months, the second leadership resignation in a year.[15]

The party counted with one newspaper, Sourg ê Mourg ("Ink and Paint"), which was published for the first time on 12 September 2015. It was originally intended to be a weekly publication but it was later decided it would be a monthly newspaper. The newspaper covered a wide range of news articles, opinion and analysis articles, interviews, surveys, ads and sections such as "featured artwork of the month" and "horoscopes". It ran its last edition in 2016.

The DSN was built around the key concept of "magic nationalism", an ideology envisioned chiefly by Napoléon Bleuberrie. Magic nationalism claimed to be a translation into politics of magic realism, a literary movement that became popular in Latin America in the XX century. Magic nationalism attempted to protect the Sabioveronese identity and encase it as a surreal entity within modern society. According to Bleuberrie, "the very existence of Sabia and Verona is a testament to surrealism, or magic. But we (buni) also exist following certain rules and guidelines which can only be attributed to the human world we are tied to". In this sense, magic nationalism promoted a patriotic sentiment which stemmed from Sabia and Verona's alleged unique and "magic" nature.

The DSN stood for gender equality and population growth in Sabia and Verona, especially in Alios.[2] Shounn Virny spoke on the issue and stated the party's goal was to increase the female population of Alios, which as of October 2015 stands at 27% of the population. As well, he said he hoped to increase the number of NB Aliosikar[2].

The party's most important decision-making body was the vetha, a plenary assembly of members who voted on any major internal party issue. The leader of the vetha was the Secretary. Another important bureau was the board of Smart Ones, the seniormost members of the party. Candidates for the position of Leader of the party had to be screened by the Smart Ones before being voted on by the vetha. Leadership elections were held using the STV system in its alternative vote form.