Bakinn (Sabian for "Link", "Genealogy" or "Brotherhood"), until 2016 known as Convergence and Amity (Asharath ê Hâshirej) was a regional federalist and ecologist political party in Sabia and Verona, founded in 2014. It was represented in ballot lists with the leter A. In April 2016, the party merged into the Left Alliance to form a single left-wing green bloc in the North.[1]

It was considered the successor of the Roots Party, which broke away from the Socialist Party in 2013. Alongside the Left Alliance, it was one of the two regional parties of Sabia and Verona which only operated in the Northern Territories (Sabia, Verona and Lycem) and did not have national representation in the Parliament of Sabia and Verona. It was a founding member of the Valtirian National Party and a signatory of the Treaty of Kotavari.[2]

Before the execution of the Haronos Plan and the Constitution of 2015, Convergence and Amity was one of the largest political parties in Sabia and Verona, operating nationwide. It was in a coalition government with the Left Alliance in 2014, and it was the largest opposition party from 2014 to 2015. Following Haronos, it was the largest regional party in the North until its merger with the Left. 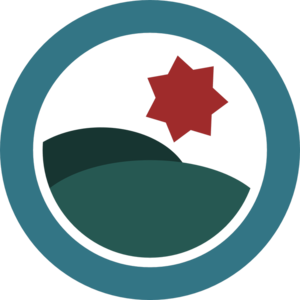 Original logo of Convergence and Amity.

In the September 2014 election the party nominated Étienne Boulin as their candidate for Prime Minister, but their performance was poor, receiving 23% of the vote and losing a seat. In early 2015 the party joined the Left Alliance to form the Valtirian National Party, an electoral coalition which would become the main opposition to Bertrand Rivière.

In late 2015, delegates from the VDM parties and the National Artists' Guild (NNS), the new ruling party of Sabia and Verona, signed the Treaty of Kotavari, by wich the VDM became the link between the ruling NNS in the Southern Territories (which control the central government) and the minor regional parties (Left Alliance and Convergence and Amity).[2]

In early 2016 the leadership of the party, headed by Saleon Pazar, announced they inteded to "rebrand" the party, abandoning the ideology of maxit and positioning themselves to the centre of the political spectrum, and renaming the party as Bakinn, Sabian for "link" or "brotherhood". This, however, proved unpopular and the party's popularity decreased. In April 2016, Bakinn merged into the Left Alliance to form a single left-wing bloc in the North.[1] While Bakinn held more seats in the United Assembly and had a generally more powerful presence in the regions, it lacked the clearly defined ideology and programme of the Left Alliance, which resulted in the latter "absorbing" Bakinn.

The party's ideology changed considerably from its foundation to the moment it was dissolved. Initially, one of the party's main ideas was maxit, Sabian for "outside". Maxit was initially devised by Étienne Boulin and Ryam Piper. The concept of "maxit" was fairly simple; the party intended to remain outside of the political spectrum by refusing to adopt labels such as "left" or "right, and instead opted for a more "free" set of ideologies that, according to members of the party, suited Sabia and Verona better. With the "rebranding" of the party as Bakinn in 2016, the party decided to abandon maxit in favour of adopting a centre-left stance in the political spectrum.

The party was in favour of keeping stable relations with the Federal Union of Juclandian Lands, and as such was considered "federalist". As claimed by the party, the federal system allowed Sabioveronese regions and citizenships to act more freely and independently yet still remaining part of the same nation. This policy became obsolete with the introduction of the Alios Agreement in 2016. As well, the party was an outspoken supporter of the Sabioveronese elective monarchy. Many of its members were also pacifists and supported the disestablishment of the Military of Sabia and Verona.

Bakinn was usually considered a green party, and was generally in favour of increasing the green areas of Sabia and Verona and placing them under the state's protection.

Electoral results for the legislature of the Kingdom (the Courts between 2012 and 2014).

Electoral results for the Legislative Assemblies of the autonomous regions and the United Assembly of Regions.