Foreign relations of Sabia and Verona

In the Kingdom of Sabia and Verona, foreign relations are the responsibility of the Diplomacy Division, a ministry of the government. The recognition of a foreign state must be approved by Parliament and ratified by the Monarch, who often plays an important role in the intermicronational development of the Kingdom, acting as its de facto representative abroad and as its top diplomat. However, the de jure "chief ambassador" of Sabia and Verona is its Diplomacy Secretary, presently Apollo Cerwyn.[1] 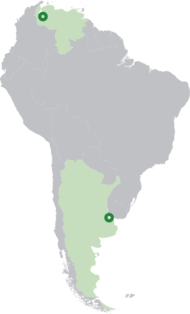 Sabia and Verona's territorial claims. The macronations in which those claims are located are light green.

Sabia and Verona's territory claims land de jure controlled by two macronational states: the Argentine Republic and the Bolivarian Republic of Venezuela. The Southern Territories of Sabia and Verona, consisting of the City of Alios (the capital of the Kingdom) and the Gonn Region, claim land in the Autonomous City of Buenos Aires, Argentina's capital city. The Northern Regions of Sabia and Verona, consisting of the "original" lands first claimed by the Kingdom at the moment of its foundation in 2012, and composed of the regions of Sabia, Verona and Lycem, are located in the Libertador Municipality, in Western Venezuela. This particular region of the Venezuelan West, located in the Chama River Valley, is known in Sabia and Verona as the Valtir Sector or Garrshirian sector.

Nations which maintain informal diplomacy with Sabia and Verona