Constitution of Sabia and Verona

The 2017 Constitution redefined the role of the Monarchy, granted equal rights to plush toy and human citizens, changed the territorial administration, and expanded the judiciary of the Kingdom. It differs from the 2015 and 2014 constitutions in that it allows for more flexibility in electoral laws, the organization of the judicial power and the structure of the Sabioveronese military, while more strictly defining parliamentary procedure, government formation, citizens' rights, and the process of constitutional amendment. It also set the groundwork for the formation of a sustainable economy.

The Constitution is entirely written in Spanish, which is the "legal language" of the Kingdom, and there are presently efforts to traduce it into the Kingdom's official language – Sabian. It has been amended once, in 2020.

The Modern Sabian word for Constitution, toagaki (commonly used with the definite article suffix toagakiná) was introduced in the Great Sabian Reform of 2017, and is a compound word made up of toa ("law"—related to tairám, "to speak") and gaki ("body", "structure" or "composition"). The Middle Sabian word for "constitution" was konstitoutsios, which was most likely derived from the Spanish constitución. Another word typically used to describe the Constitution is asratoaná ("the root law") or meitoaná ("the mother law").

The 2014 Constitution of Sabia and Verona was the first constitutional document of the Kingdom and one of the first complete constitutions in the Valtir Sector, after the constitutions of the Second Berinese Republic and the Union of Artaghe. Adopted after the formation of the Federal Union of Juclandian Lands and the coronation of Queen Isadora, the 2014 constitution established the Kingdom as an autonomous province of the FUJL and a parliamentary monarchy. Most notably, this constitution followed the FUJL model of segregating humans (federal citizens) and plush toys (provincial citizens), giving each "citizenry" different representatives in the government (the office of the Governor was reformed into the head of the federal citizenry, while the Prime Minister became the leader of the provincial citizenry). This was reflected in the reformation of the Courts, which became a bicameral parliament composed of the Senate (later House of Peoples) and the Chamber of Deputies (later General Assembly); the former was composed only of humans and the latter only of plush toys.

The system established by the 2014 Constitution was highly bureaucratic and ineffective, and after the Great Assembly reforms of 2014 by PM Bertrand Rivière the Kingdom was submerged into inactivity. Rivière unconstitutionally dissolved the Courts in July 2015 and convoked a constitutional assembly, what became known as the Congress of Salisse, held on 18 August 2015.

Reverse of a 1 groxi note, featuring the preamble of the 2015 constitution of Sabia and Verona.

Starting in 2016, the Left Alliance, one of the three political parties active in Sabioveronese politics, began to campaign for constitutional reform. The Left's leader, Apollo Cerwyn had been a member of the Salisse Congress, but claimed nonetheless the 2015 Constitution was deeply flawed in different sections, including the idea of separation of powers and the inflexibility on electoral laws.[1] Cerwyn became Deputy PM, on 1 October 2016, when the Left became the junior party in a coalition with the National Artists' Guild, headed by Shounn Virny as Prime Minister.[2]

According to Cerwyn and other Left Alliance referents, Virny had promised them the issue of constitutional reform would be discussed as part of the government's program and addressed in Parliament.[3] The PM, however, refused to discuss the topic and dismissed the Left's concerns, further straining relations in the already conflicted governing coalition.[4]

By February 2017, the Left had teamed-up with the Liberals, the largest party in Parliament, to campaign for constitutional reform. Alongside the Liberals, the Left was able to put pressure on the unpopular Virny to allow for a referendum to be held on whether the 2015 Constitution should be reformed or not.[1] The referendum was held on 5 March 2017, the first of its kind in Sabioveronese history. It concluded with the 'Yes' taking 74% of the vote, with a turnout of 90%. Following the referendum, Virny resigned from the party's leadership.[5]

We, the Peoples of the Valtir, of intrinsic diversity, made up of the historic union of plush toys and humans, manifest our commitment to the unity and sovereignty of our nation, Sabia and Verona. We recognize, as the highest values of our society, liberty, equality, plurality, aesthetics, harmony with nature and respect towards our peers. Having as our sole goal creating a nation of equals where democracy and justice govern, we have assembled into the Constitutional Assembly convoked on the eighth day of the month of March of the year Two-Thousand and Seventeen, four years after the formation of our nation, and now we decree the following Constitution of the Kingdom of Sabia and Verona, to reform our Kingdom into a fairer, freer, more active state. 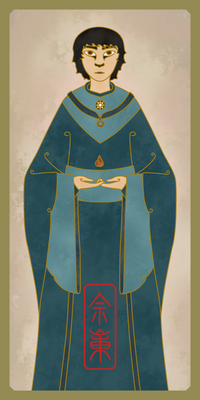 Title I establishes the Church of the Pahun (High Priest Haerpyer pictured) as the official state church of the Kingdom.

Title I of the Constitution outlines the fundamental principles of the Sabioveronese state. It encompasses articles 1 through 6, and it establishes the government system of Sabia and Verona (a parliamentary, constitutional, democratic state, with an elective popular monarchy), the official state church, the status of the Kingdom as a pacifist nation and the official language (Sabian) and national languages (Spanish and Lycene).

Title II enlists the basic rights of humans and plush toys in the Kingdom. It is of special importance as it reversed the segregationist positions of the 2014 and 2015 constitutions. Unlike its predecessors, the 2017 constitution makes no mention of "federal" or "provincial" citizens, instead using the terms "human" and "plush toy". It also marks the fundamental principles of the Kingdom's citizenship laws and protects freedom of expression, cult and the right to private property. It stretches from article 7 to article 19. This title is heavily based on the Constitution of Venezuela of 1999.

Title III describes the basic territorial organization of the Kingdom, the basic units of administrative division and the powers and limitations of regional and prefectural governments. The 2017 constitution did away with the municipalities, the lowest form of territorial division established by the 2015 constitution, and ruled the Kingdom is to be divided into regions and autonomous regions, which are subdivided into prefectures and dependencies. Like the previous constitution, autonomous regions are not represented in the national Parliament. Prefectures now are administered by Prefects, who make up the Regional Councils of autonomous regions, which replaced the former Legislative Assemblies of the autonomous regions. Title III encompasses articles 20 to 30.

Title IV describes the role, powers, duties and limitations of the Monarch, who is generally described throughout the whole document as simply "Their Royal Highness" (Su Alteza Real), or, in occasions "Their Royal Highness the King or Queen of the Valtirians". The 2017 constitution sets more limits to the Monarch's power and adds a "recall clause" (article 45) which allows for the Monarch to be revoked of their authority and forced to abdicate "if and only if" they act against the constitution and the law. It also defines the extent of power of the Royal Decree. Title IV encompasses articles 31 to 45.

Title V describes the role, powers, duties and limitations of the Government, as well as its structure and inner workings. It thoroughly describes the government formation process and the line of succession. In contrast with past constitutions, the 2017 constitution relies more on the Government as a whole and not so much on the Prime Minister only. Title V runs from article 46 to article 54.

Title VI lists the powers and role of the Parliament, it describes who can run for parliament seats and under what conditions, and it outlines the groundwork for the electoral system. Title VI describes parliamentary procedure to an extent that former constitutions didn't, mostly drawing from convention and traditions passed on since the times of the Old Courts. Notably, article 75 mandates the establishment of a National Gazette in which all laws are to be published in order to become effective. Title VI runs from article 55 to article 75.

Title VII establishes the framework for the judiciary power of the Sabioveronese state. It establishes the basic court hierarchy, with a Supreme Court at the top to serve as the Kingdom's court of last instance and as constitutional court. It establishes some of the judiciary's powers and the duties, benefits and powers of the Magistrates of the Kingdom's courts of justice, chiefly those of the Supreme Court. It encompasses articles 76 to 84.

Before the introduction of the Electoral Commission in the 2017 Constitution, there had been no independent body dedicated solely to the supervision of elections in Sabia and Verona. From 2012 to 2014, the Commission for the Preservation of Democracy was in charge of organizing elections, and from 2014 to 2017, it was the responsibility of the Home Ministry.

Title IX lists basic economic provisions, intended to set the groundwork for the establishment of a working, sustainable economy, a long-standing goal of all three parties that conformed the Constitutional Assembly. It allows the state to regulate economic matters to maintain "national economic stability" (article 92), and establishes a set of areas in which the state must promote investment and economic development. It encompasses articles 92 to 97.

Title X underlines the supremacy of the constitution above all other legal documents in the Kingdom, and it sets the provisions for constitutional amendment and reform. It also establishes the procedure for the convokation of a constitutional assembly. It encompasses articles 98 to 104. Similarly to title II, this title is heavily based on the Venezuelan Constitution of 1999.