The Democratic Party (Sabian: horói geñkurago, HG; lit. "Party for the People's Government"), known simply as the Democrats (geñkurakagi) and sometimes referred to as the Red Party, is a nationalist political party in Sabia and Verona, and one of the two currently active parties in the Kingdom, alongside the Liberals. It was founded in 2017 as a merger between the Left Alliance and the Jensist faction of the National Artists' Guild. 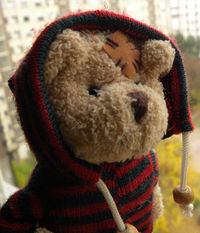 Apollo Cerwyn, co-founder of the party.

The Left Alliance was widely considered to be the successor of the Socialist Party, which was the first political party in Sabia and Verona. The Socialist Party was founded by Napoléon Bleuberrie, who was the first Prime minister, and it espoused Bleuberrism as one of its fundamental ideologies. Bleuberrie had been successful in keeping the Sabioveronese left united until 2013, when he led a failed self-coup attempt. Following the coup, the Socialist Party came undone, with a large faction separating to form the Communist Party of Sabia and Verona (KMCW). Léon Galieri, who founded the KMCW, took a fervent anti-Bleuberrist stance, as did all other political groups in the Kingdom at the time, with the exception of the waning Socialist Party.

In April 2016, Bakinn (formerly known as Convergence and Amity) merged into the Left Alliance to form a single left-wing bloc in the North.[1] While Bakinn held more seats in the United Assembly and had a generally more powerful presence in the regions, it lacked the clearly defined ideology and programme of the Left Alliance, which resulted in the latter "absorbing" Bakinn. As a result, the party gained ten more seats in the United Assembly of Regions and a Governor, and changed its name to Left Alliance – Souiu, in honor of the Free Suyu Front. This was later changed to "Left Alliance – Bakinn" in 2017, to reflect the union of the Alliance with the former party.

The Democratic Party was founded as the merger between two groups: the Left Alliance and the so-called "Socialist Caucus". The Left Alliance was a large eco-socialist party, originally created as a merger between different leftist groups in Sabia and Verona in 2014, including the Socialist Party, the Communist Party, and factions of the Roots Party. The "Socialist Caucus", for its part, was a dissident faction of the National Artists' Guild led by Snø Jens-Galieri that splintered from its main party in October 2017.[2] Talk of a 'leftist superfront' (so-called because it would group together all the left-leaning forces in Sabia and Verona) had existed since early 2017, when the National Artists' Guild, once the Kingdom's largest party, began dwindling due to a number of factors. It was around this era that the Left Alliance began positioning itself as the largest opposition party, a position that became solidified in the results of the 2017 parliamentary election.[3]

The first step in the formation of the Democratic Party was the joint party congress held between the Left Alliance and the Socialist Caucus on 2 November 2017. The party was officially founded in a presentation held in Alios on 28 November 2017, in which the new leadership was revealed alongside the party's program and founding document.[4][5]

In the 2018 general election, the Democrats won 11 seats in the 23-member Parliament, making them the largest party despite being a seat short of a majority. Due to the Artists forming a confidence and supply deal with the Liberals, Dargany's government was returned for a second term and the Democrats remained in the Opposition.

The Democratic Party is a self-described "pluralist, popular and nationalist" movement.[5] Most of its ideological background comes from the Left Alliance, which advocated for direct democracy, eco-socialism and hard statism. Statism and environmentalism remain important aspects of the Democratic Party's ideological component, as it stands in contrast to the bases of its main opponent, the Liberal Party.

The Democrats are opposed to further expansion of the Kingdom's territorial claims, opposed to the irredentist views of the Liberals. The party was initially opposed to Noa Dargany's New Frontier Plan, although Cerwyn and the parliamentary Democrats agreed to it after months of negotiations in 2019.[6][7][8] The HG is also against the expansion of the National Guard, though the anti-military sentiments expressed by some of the party's members (such as Snø Jens-Galieri) has not been codified in the party's manifesto, and other main figures have dismissed accusations of wanting to disband the Guard completely.

The Democratic Party's anthem takes its music from the popular Italian labor movement song Bandiera Rossa (Red Flag), and it maintains a degree of faithfulness to the original version. The anthem is titled simorán agsin ("The Red Flag").