Proun (Middle Sabian: "Plush toy") is a 2016 Sabioveronese short film directed by Pomme-Gabrielle Gauvier and written by Apollo Cerwyn. The short film also stars Gauvier, and is the third film he directed as well as the second in which he stars as himself. The film is entirely narrated in Middle Sabian, the predecessor of the modern Sabian spoken today; it was the first piece of audiovisual media fully in the Sabian language ever made.

The film was produced by the Sabioveronese government's Arts Division, then headed by Arts Secretary Ryam Piper; it was the first state-sponsored film ever made in Sabia and Verona. It was produced and edited by Tarik Kârjasary, and features former Supreme Court judge Mattías Rou (credited as Matías Rivera). It was filmed in the Batunói Marshes, in what is now the Doga Runann Nature Reserve.

The entire film consists of shots of Pomme looking into the distance or doing menial activities in the Batunói Marshes, as an off-screen voice narrates his thoughts regarding existential matters of the life and being of plush toys. Gauvier muses over the raison d'être of plush toys, ponders over capitalism, and touches on the limited reach of plush toy sentience within Sabia and Verona, as he states that "Xohanxagou [Ħanjago] is my universe".

As he delves into suicidal thoughts, Pomme calls his compatriots (fellow plush toys) "ignorant", and the camera pans to Matías (Rou), whom the narrator claims is "like Jason Bourne". The film ends with a shot of a jacaranda tree, as Pomme states that the winter will take their flowers again, and states that he hopes the Gods will take him with them. 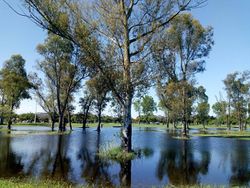 The film was entirely shot and edited in a single day. Camera work, production and editing was done by Tarik Kârjasary with the assistance of Rocío Gómez. The film was entirely filmed in the Batunói Marshes, inbetween what is now the Doga Runann Nature Reserve and the Grand Duchy of Rai, a federal state of the Abeldane Empire. Neither Sabia and Verona (through Doga Runann) nor Abelden had yet lay claim to the Batunói Marshes at the time the film was made, so technically Proun was made in Argentine soil.

Pomme-Gabrielle Gauvier has not spoken extensively about the meaning or intent behind the film. Upon its release in December 2016, he simply said that it was "only an exploration of [his] own dark thoughts".

The film was met with mixed reception in Sabia and Verona upon its release. While some critics praised Gauvier's incisive commentary and the unprecedented production effort by the Arts Division, others criticized the negativity of Gauvier's words. Writing for the print edition of Sourg ê Mourg, Marie-Antoinette Arosaky called the film "incendiary and stupid", and called for it to be banned nationwide. The Liberal opposition in Parliament questioned the use of state funds to produce the film, and Liberal deputy leader Simor de Jena called onto Piper to resign.