Rai claims territory in Argentina, not far from Sabia and Verona's southernmost claims of Alios and Gonn, and Austenasia's crown dependency of Esmondia, and in the United States. The capital of Rai, and its only present territory, is Batori. The first Grand Duke of Bergendorf was Angelo I, who was succeeded by Grant in August 2016, as Grand Duke of New Lviv. Tarik became Grand Duke on 30 June 2017, and renamed the Grand Duchy as Rai.

The word rai comes from the Sabian language, and it means "primordial", "superior" or "king". The demonym of the Grand Duchy is rai. New Lviv, the grand duchy's former name, comes from the city of Lviv in the Ukraine.

The state was originally founded in 2016 as the Grand Duchy of Bergendorf, a name it held briefy while it was governed by Grand Duke Angelo I Geulin.[1] The Grand Duchy's original claims lay in the United States. When Angelo abdicated in 2016, the Grand Duchy was given to former Vorsitzender and Conservative Party of Abelden politician Grant Hawkins, who on 26 August 2016 became Grand Duke Grant and renamed the state New Lviv, for the Ukrainian city of Lviv.[2][3] New Lviv had its capital in New Kent, surrounded by the United States state of Ohio, and its official languages were Afrikaans, English and Ukrainian.

In September 2017, the Principality of Skandberg was merged with Rai, and so the Grand Duchy once again attained land claims in North America. These claims were subsequently relinquished.

In 2019 Karjasari left federal politics to focus on Rai, and abandoned the Social Ecology Party to found the Batu Party, an exclusively regional party that advocates for regional rights and the promotion of Valtirian culture in the grand duchy. The same year, the Grand Duke expanded the Grand Duchy's territorial claims in Batori, expanding the border with Sabia and Verona.[4] In October 2019 Rai became the last federal state to sign the Treaty of Accession of the Archduchy of Tusmore.

In January 2020, Austin Jaax was appointed Seneschal of Rai, replacing White. In May 2020, Grand Duke Tarik released a decree officially establishing the Charter of Rai as the Grand Duchy's first constitutional document.[5] The Charter granted ample executive, legislative and judicial powers to the Monarchy, whilst establishing the framework for the formation of a consultative assembly named Bok.

Following a seditious non-binding referendum held on 2 January 2021 to dethrone Tarik, Jaax and another bokág were barred from holding public office, and the office of the Seneschal was vacated.[6] 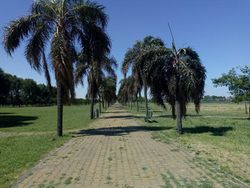 Rai is part of the broader area known as Ħanjago, which includes all of Sabia and Verona's southern territories. The grand duchy's nominal capital, Batori, and its surrounding territories are located within a flat open area bordering the Autonomous City of Buenos Aires in Argentina to the North and East and the Doga Runann Dependency in Sabia and Verona to the Southwest. These territories lay 25 m (82 ft) above sea level, mostly covered in pastures and presenting a mild degree of biodiversity in fauna and flora.

The Rai border with Sabia and Verona is subject to an international treaty signed between Abelden and the Sabioveronese state which allows for the free movement of people and goods; the treaty has been in place since 7 March 2019.[7]

Rai has a humid subtropical climate (Köppen Cfa), with very humid summers and mild winters. The warmest month is January, with a daily average of 25.1 °C (77.2 °F). Most days see temperatures in the 28 to 31 °C (82 to 88 °F) with nights between 16 to 21 °C (61 to 70 °F). Heat waves from Brazil can push temperatures above 35 °C (95 °F), yet Rai is subject to cold fronts that bring short periods of pleasant weather and crisp nights. Relative humidity is 64–70% in the summer, so the heat index is higher than the true air temperature. Spring (September to November) and autumn (March to May) are generally mild and volatile, with averages temperatures of around 17 °C (63 °F) and frequent thunderstorms, especially during the spring.

Winters are temperate, though frost may be experienced from May to September. Relative humidity averages in the upper 70s%, which means the territory is subjected to moderate to heavy fogs during autumn and winter. July is the coolest month, with an average temperature of 10.9 °C (51.6 °F). Cold spells originating from Antarctica occur almost every year, and combined with the high wintertime humidity, conditions in winter may feel much cooler than the measured temperature. Most days peak reach 12 to 17 °C (54 to 63 °F) and drop to 3 to 8 °C (37 to 46 °F) at night. Southerly winds may keep temperatures below 10 °C (50 °F) for a few days, whereas northerly winds may bring temperatures above 20 °C (68 °F) for a few days; these variations are normal.

Spring is very windy and variable: there may be heat waves with temperatures of 35 °C (95 °F) even in early October, as well as periods of much colder weather with highs close to 10 °C (50 °F). Frost has been recorded as late as early November, although this is unusual. Severe thunderstorms are likely between September and December.

Rai receives 1,242.6 mm (49 in) of rainfall per year. Rain can be expected at any time of year and hailstorms are not unusual. 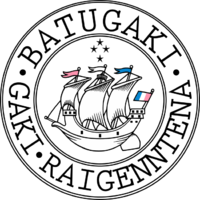 Seal and former logo of the Batu Party, the sole existing state party in Rai.

The Grand Duke may delegate some of their political power to a Seneschal to and aid in everyday governance; the Seneschal, in turn, appoints a number of ministers to the Cabinet of Rai, which collectively excercises the Grand Duke's authority. The current Seneschal is Austin Jaax. The Grand Duke may also allow the establishment of a bok (Sabian for "council"), or consultative assembly, to give advise and counsel in matters of governance, should the monarch see it fit or due to a growth in popular "demands". The Charter of Rai doesn't specify the method by which bok members are to be elected, though it does allow for the formation of state parties or local chapters of federal parties; at the moment the only existing political party in Rai is the Batu Party. The first and current Bok of Rai convened on 8 July 2020.[8]

The ruling dynasty is the House of Karjasari, a Valtirian lineage of Sabioveronese Electors. The reigning Grand Duke, Tarik Karjasari, also reigns in Sabia and Verona as King of the Valtirians.[4] The Rai Crown is inherited through absolute primogeniture; the heir-presumptive of Rai is presently Prince Kaj, Duke of Monesari. The House of Hasaraši (through all eligible descendants of Prince Ískandu Hasaraši) is also part of the Rai line of succession since 2019.

The flag of Rai is a 2:3 vertical triband of sky blue, white and baby pink, with a stylized Southern Cross (Crux) in the upper part of the sky blue band. The blue in the flag represents the open sky above Batori and the Grand Duchy's relationship with Abelden; white and pink are the traditional colors of the Valtirian Monarchy and are associated with the ruling grand ducal house. The Southern Cross highlights Rai's position as the Empire's southernmost state, as the Crux constellation is only visible from the Southern Hemisphere. The former flag of the Grand Duchy of New Lviv (in use from 2016 to 2017) was a green field vertically crossed by a golden wave.

The coat of arms of Rai is derived from the grand ducal flag; the blazon is described as per pale azure and rose, a pale argent, chief three vertically aligned sailing ships proper. The sailing ships represent the settlers who travelled south from the Valtir during Haronos; the number three is associated with beauty and abundance in Valtirian tradition. The shield is crowned by the traditional crown of Abeldane grand dukes, and supported by three white deer.

The state anthem of Rai is the 2020 hit pop single Physical by English singer Dua Lipa, from her latest album, Future Nostalgia; it was adopted on 28 May 2020.[9] From 2017 to 2020 the state anthem was the 2017 hit pop single New Rules, also by Lipa. The Grand Duchy's state motto is "batuná senar bašúi", Sabian for "the Southern Wind is always loyal".

The sole official language of the Grand Duchy, as established in its Charter, is Sabian (sabintái). The Sabian language is a conlang developed and spoken in Sabia and Verona. Alongside Esmondia (an Austenasian crown dependency) Rai is the only polity outside Sabia and Verona to have adopted Sabian as an official language. However, in practice, the Grand Duchy uses English as its everyday operative language as it is the lingua franca of the Abeldane Empire.