It was founded in August 2017 as a merger between the Social Ecology Party of Abelden and the Labour Party, expecting to fill the gap of left-wing political forces in Abelden. During its existence it produced three Vorsitzende (Von Uberquie, Langford and Karjasari) and was a major player in Abeldane politics, either participating in coalition governments or as the main opposition party in the Reichsversammlung.

After a string of defections of some of its most prominent members, ASE saw a decrease in popularity and became the smallest party in the Empire after the December 2019 federal election. In preparation for the June 2020 election, the party agreed to merge with the Party of Royalists and Cooperatism in May 2020 to form the Party of Royalists and Greens, which itself would only exist for a couple of months until it merged with the Abeldane National Union to form the NRGU in July 2020. 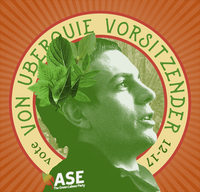 The party was founded as the Social Ecology Party of Abelden (SEPA) on the 6 June 2017 by Newton von Uberquie, following the June 2017 federal election. Shortly after its formation, SEPA was invited to support the governing coalition led by Vorsitzender Patrick Renwick. That same day, the Interior and Security Minister Artemis Langford defected from the ruling Abeldane National Party to join SEPA, granting the new party its first cabinet position.

On 9 August 2017, in the midst of the campaign for the August 2017 federal election, the Labour Party and SEPA held talks to form a unified leftist party. The two parties agreed to form Abeldane Social Ecology - The Green Labour Party (ASE-GLP), which contested in the election with von Uberquie and Langford as candidates for Vorsitzender and Stellvertreter, respectively.[1][2]

The August 2017 election resulted in a great success for ASE, as both von Uberquie and Langford were elected to office and the party became the largest in the Reichsversammlung. Von Uberquie formed the 26th ministry on 23 August 2017, in coalition with the Independence Party of Abelden and the Abeldane National Party (which merged into the Abeldane National Independence Party shortly thereafter).[3][4] Following Newton von Uberquie's sudden resignation from both the Vorsitzendership and ASE's leadership, Langford succeeded him in the former office in her capacity as Stellvertreter, and in the latter after being elected on 23 September 2017.[5]

Following von Uberquie's departure, Langford was elected Representative of ASE on 27 September 2017. Ahead of the December 2017 election, Langford was chosen unanimously as the party's Vorsitzender candidate. The possibility of contesting Stellvertreter candidates in a simultaneous open primary was discussed by the party's membership, but eventually an agreement was reached with the National Independence Party to endorse the campaign of ANIP leader and incumbent Stellvertreter Patrick Renwick in exchange for ANIP's support in Langford's campaign. However, after poor results in the polls, Langford decided to step down as the party's candidate and on 7 December 2017 von Uberquie became once again ASE's Vorsitzender candidate.[6]

ASE would continue to primarily occupy the opposition benches, except during the national unity governments of ASE’s Tarik Kârjasary and the Liberty Front’s Edward Daniels. By late 2019 however the party was back Leader the opposition, however would suffer its worst results ever in the December 2019 election, winning only 1 seat. As a result of this, the party eventually merged with its nearest ideological ally, the Party of Royalists and Cooperatism in May 2020. 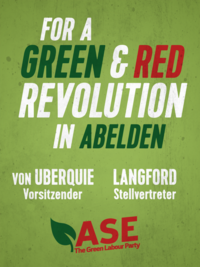 ASE poster for the August 2017 election.

Abeldane Social Ecology's main ideological base was the concept of social ecology, developed by the American libertarian socialist author Murray Bookchin. It advocated a reconstructive and transformative outlook on social and environmental issues, and promoted directly democratic and confederal politics.

As outlined in the SEPA manifesto for the August 2017 election, the party was against citizensharing and inactivity within government ranks. It supported the creation of protected areas under communal control and citizens' assemblies in all federal states. It supported promoting the Empire's culture through state-sposored action, and further integration of people from all social backgrounds. The party was for LGBTQ+ and minority rights.[7]

Abeldane Social Ecology opted for directly democratic collective leadership of all of it's members. Motions of party policy were voted upon by an open ballot of all the members of the party, before which a motion was judged by the active General Secretary as to whether it aligned with the goals of the movement. Therefore, the General Secretary was the only office in the party with any degree of unilateral authority. The role of the Representative was to communicate the results of motions, and thus all of ASE's policy, to the greater community. Therefore, the Representative was often seen, mistakenly, as the Leader of ASE. However, the party maintained that it has no single active leader.