The 14th Abeldane federal election (formally the 14th Abeldane general election) took place from the 15th to the 20th of December 2017, as per Elections Act. The original date of the election was set for 8 to 10 December 2017 but was moved due to the recent passage of a constitutional amendment which prevented the Elections Act from taking effect and which was swiftly diffused in order to avoid the possibility of a constitutional crisis and for the urge of parties to allow more campaign period. The final date of the election was announced by the Emperor on 15 November 2017 originally, then on 3 December again, following consultation with the Reichswahlkommission. The final election date was the 20th of December, 2017, following the annulment of the executive election by the Reichwahlkommission in light of allegations of electoral fraud.

The election saw the election of Thomas M. of the United Rhinoceros Party of Abelden as Vorsitzender and Patrick Renwick of the Abeldane National Independence Party as Stellvertreter. This marks the first time the URP has managed to win an executive election. The URP also carried a plurality of seats, winning five - enough to form an administration with the Abeldane National Independence Party and the National Federalist Party. The election saw the fall of the Abeldane Social Ecology Party from the party of government to the only party in opposition, gaining four seats in the Reichsversammlung, losing one seat it held prior. The National Federalist Party saw its first participation in an election and was the best performer of this election, garnering 17.4% of the total votes and an increase of 2 seats.

The election was one of the most controversial in Abeldane history, with allegations of electoral fraud causing the first result of the executive election - which returned Newton von Uberquie incorrectly as Vorsitzender - to be overturned by the Reichswahlkommission, the Abeldane electoral commission. Investigations into the fraud are still ongoing, and the government has yet to name a suspect, though has confirmed that the suspect is one of the citizens of the Emperor's state of Alenshka.

All Reichsversammlung seats and the positions of Vorsitzender and Stellvertreter were re-elected during this election and it marked the second time legislative elections were held in the Empire after the August 2017 elections. All parties running during this election were all newly established parties that either were formed by a merger or by creation, with the exception of the Abeldane Social Ecology party which was the only party left from the August 2017 elections.

The December 2017 election was the fifth election in Abelden since the start of 2017, and the fourteenth overall since the first election was held in 2015.[1] At the previous election, held in August, the Social Ecology party broke through and received a plurality of the seats in the Reichsversammlung (5 out of 15 elected seats) and its candidates for Vorsitzender and Stellvertreter (Newton von Uberquie and Artemis Langford) were both elected. Von Uberquie formed a government with the National Party and the Independence Party, which merged into the National Independence Party in September.[2]

In September 2017, von Uberquie suddenly resigned from his position and temporarily relinquished his Abeldane citizenship, alongside other positions in the MicroWiki community (he was, at the time, Vice Chair of the Grand Unified Micronational). Following constitutional law, Langford then stepped in as Vorsitzender and formed her own government, which was nearly identical to von Uberquie's.[2]

Over the course of Langford's term, the two opposition parties (the Federalists and the Rhinos) merged into the United Rhinoceros Party (URP). Another party, the National Federalists, was also formed as a splinter from the Federalists before its merger.[1]

A new electoral system was implemented in Abelden in November 2017 to be used in the December election. The single transferable vote system adopted for the August 2017 election was scrapped as it yielded unsatisfactory results; the allocation of seats in the Reichsversammlung was not entirely proportional. Electoral reform was endorsed by the Emperor and the Reichswahlkommission. The system used in the December election will be closed party list proportional representation, with a single nation-wide electoral district and fifteen elected seats, in addition to one appointed seat.[1]

Abeldane Social Ecology (ASE) was originally formed in June 2017 as the Social Ecology Party of Abelden (SEPA), and it changed its name when it merged with the short-lived Labour Party in August 2017. After a surprise victory in the August 2017 election, ASE came to power with a plurality of seats in the Reichsversammlung and both its Vorsitzender and Stellvertreter candidates being elected: Newton von Uberquie, and his deputy, Artemis Langford, took office on 23 August 2017.

Originally, Langford was chosen unanimously as the party's Vorsitzender candidate, as she held the position from 19 September 2017 following von Uberquie's resignation. The possibility of contesting Stellvertreter candidates in a simultaneous open primary was discussed by the party's membership, but eventually an agreement was reached with the National Independence Party to endorse the campaign of ANIP leader and incumbent Stellvertreter Patrick Renwick in exchange for ANIP's support in Langford's campaign. However, after poor results in the polls, Langford decided to step down as the party's candidate and on 7 December 2017 von Uberquie became once again ASE's Vorsitzender candidate.[1] 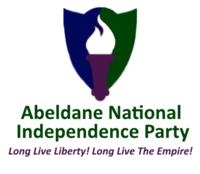 Logo of the ANIP.

The Abeldane National Independence Party was formed in September 2017 as a merger between the Abeldane National Party and the Independence Party of Abelden, two parties that had long been considered collaborators and had been together in several coalition governments, mostly under the leadership of Vorsitzender Patrick Renwick, who led four ministries altogether.[2] The two parties have previously participated in the last federal election and with their merger, ANIP became the largest political party in the Reichsversammlung with a total of 6 seats, overtaking the Social Ecology Party with 5 seats.

ANIP ran a campaign focused mostly on the party's parliamentary record of attendance, and the long history of governance, wielding mottoes like "Active, Committed, Experienced". Renwick is the official candidate for Stellvertreter for the ANIP and the ASE. He also confirmed on the 19 November 2017 on ANIP's endorsement of Newton von Uberquie as candidate for Vorsitzender.

The Federalist Party ended up being at the last place in the previous election, although it was the only party to gain a seat following a reduce of the size of the seats in the Reichsversammlung. After Michael Thomas Brazeau resigned as party leader, James Frisch succeeded Brazeau as leader. Bounded with activities and busy schedule, Frisch resigned and Thomas M. was chosen as their new leader and led the party to rise in the opinion polls.

Logo of the Federalist Party of Abelden.

Logo of the Rhinoceros Party of Abelden.

Under M.'s leadership, the party went through several changes and reforms and saw the resignation of Michael Thomas Brazeau from the party. Brazeau has been considered as a problem in the party's popularity because of the well-known fact of Brazeau's strong and conservative views, especially emphasizing on an economy, with him leading on constant debates and arguments in the Abeldane lounge on Skype. M. became the party's candidate for Vorsitzender while endorsing the Rhinoceros candidate for Stellvertreter, Max Pollack. Brazeau was expected to become the party's candidate for Stellvertreter but ended not being their candidate.

The Rhinoceros Party ended up at 4th place in the last election and was led by Horatio Eden. The party managed to become a popular platform for centrists despite its somewhat 'satirical' position in Abeldane politics. Notable people who joined the RPA include Max Pollack and Grant Hawkins. The party was well-known for its opposition to Brazeau because of his political views and his 'failures' in Abeldane politics. The Rhinceros endorsed Thomas M. of the Federalists as their Vorsitzender candidate while Max Pollack, who was the Deputy Leader of the Rhinoceros, became their candidate for Stellvertreter.

Following the resignation of Brazeau from the Federalists and the creation of the National Federalist Party, talks began between the two parties on a possibility of a merger. The two parties merged on the 1 December 2017 and formed the United Rhinoceros Party, with both Eden and M. becoming co-leaders.

The URP merged the original nominations of the Federalists and the Rhinoceros Party, specifically of M. for Vorsitzender and former Rhino deputy leader Max Pollack for Stellvertreter that the original parties mutually endorsed, into one party ticket when the parties merged in December. On the 14 December, Edwin Farrar defected from the ASE and joined the URP whilst John Gordon defected the URP and joined the ANIP.

The party polled low but consistently and clearly embedded its ideology in nationalism and the “third position” with a series of campaign posters a manifesto and even a song. The party campaigned heavily on attacking the URP and their abandoning of ideology for “pragmatic centrism”.

The graph shows the average polls each party has received since 2017 IV federal elections.

Legislative elections were held on 16 December 2017 and allowed 16 seats of the Reichsversammlung to be elected using closed party-list proportional system with a nationwide list. The Elections Act amended the seats of the Reichsversammlung and increase the amount of elected seats from 15 to 16 plus 1 appointed seat by the Emperor. As of now, the appointed seat remains vacant until an appointment is made by the Emperor.

An extension to the voting period was given due to the low turnout and ended on 17 December 2017 at 04:00 UTC+00:00. Total turnout for the legislative election was at 79.03%, lower than previous elections since February 2017.

The election for Vorsitzender took place after the legislative vote, from 17 to 18 December 2017. It used the instant-runoff voting system, which employs ranking as a form of vote. This was the second executive election in Abeldane history to employ this method. The General-Secretary of Abeldane Social Ecology, Newton von Uberquie, won the election with 46.81% of the vote, beating the United Rhinoceros Party's Thomas M. (29.79%) and the National Federalist Party's Alejandro Whyatt (21.27%). Since Uberquie received over 45% of the first preference votes and ranked over 10% percentage points above the next candidate with the most first preference votes (M.), the ASE candidate was elected on the first count.

On 19 December 2017, the Reichswahlkommision announced that it had found evidence of fraud in the 17-18 executive election, and annulled its results, scheduling a re-run of the election for 19-20 December 2017. An investigation on the alleged fraud is currently ongoing.

In the re-run of the executive election, the original result was reversed. Neither Mr. M. nor Mr. von Uberquie won the election on the first round, and - following the redistribution of second preference votes cast for Mr. Whyatt - the Reichswahlkomm declared Mr. M. the winner, and subsequently Vorsitzender-elect.

The election for Stellvertreter took place alongside the Vorsitzendership election, from 17 to 18 December 2017. It will use the instant-runoff voting system, which employs ranking as a form of vote.