From MicroWiki, the free micronational encyclopædia
(Redirected from Morgannwg)
Jump to navigation Jump to search

Morgannwg (/mɔrˈɡanʊɡ/), officially known as the Kingdom of Morgannwg (Welsh: Teyrnas Morgannwg), is a federal state in the Abeldane Empire. It was previously known as Amon Lasgalen until the King, Llewelyn, decided to change it to Morgannwg.

The name Kingdom of Morgannwg is taken from the name of the County which formerly was the core claim, and the name of the noble family that King Llewelyn claimed lineage from and has restored.

The flag is a combination of Saint Piran's Cross and Saint David's Cross. It is a White cross outlined in Gold against a Black field

Amon lasgalen began as a state of Kozlova, a deceased micronation, created in June 2012. Its initial name was "Aztoka", but after the September revolution, the state was re-created as Amon lasgalen.

The king, Llewelyn Lawton decided that Lasgalen should join the Sorrenian Federation, as he had a prominent role in the Federation. Lasgalen joined Sorrenia on the same day that it was created (03/11/13). On the 2nd of February, the King left Sorrenia and Amon Lasgalen, after his party, the Centralist Anglican Party was abolished, due to a law stating that religion and state affairs must be separate. Llewelyn had been considering leaving micronationalism for a number of days, and he stated that "It was this that finally broke it for me, I no longer care for micronationalism".

Return of the King

Llewelyn would later return and retake the throne. In June 2016 Morgannwg joined the Abeldane Empire as a federal state, though quickly slipped into inactivity. In August 2018 Morgannwg was completely inactive and King Llewelyn gone. As a response, Abeldane Emperor Newton deposed him by Imperial Decree on 28 August 2018, replacing him with Anthony.

King Anthony would however not be able to regenerate activity in the state, and in January 2019 activity in Morgannwg was again at a low. Through Imperial Decree, Emperor Newton in turn deposed Anthony on 7 January 2019, and replaced him with his consort, Sian. Activity improved somewhat under the reign of Sian, with the Kingdom attempting to establish a more functional, democratic government through the inconclusive June executive election. The inconclusive result lead to a repeat of the election the following month, which made Richard Hytholoday the Chief Minister. By November 2019 however he had become inactive, and Queen Sian replaced him with Nicholas Randouler, and in February 2020, James Frisch. Morgannwg enacted its second constitution under Frisch in March. Following the enactment of new constitution a general election was held, which resulted in Frisch's uncontested re-election as Chief Minister, now called the Prif Weinidog. 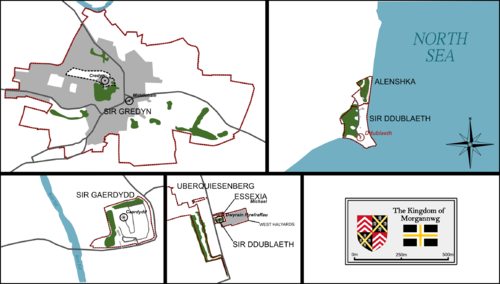