Abelden is a semi-constitutional monarchy with a multi-party democratic system. Party politics occur within the framework of the legislature, a bicameral parliament known as the Reichsversammlung. Members of the Reichsversammlung are mostly elected in free elections held across the Empire, while a seat is reserved for the Heir to the throne and another for an appointed member who is handpicked by the Emperor.

Presently, the Reichsversammlung consists of 13 MRs. As of the Concordiagate scandal, the chamber is dissolved. Historically, parties have had to form coalitions in order to maintain stable governments; though the current Provisional ministry, formed in July 2020, is made up of members from a single party and independents. 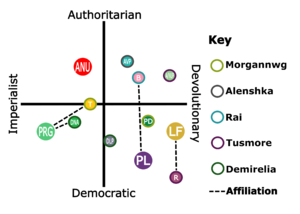 A rough political compass of parties in Abelden. 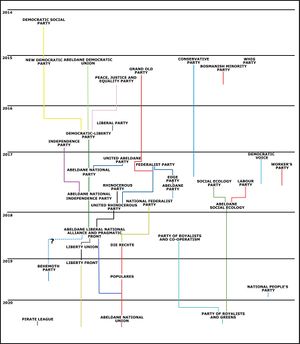