From MicroWiki, the micronational encyclopædia
(Redirected from Alenshka)
Jump to navigation Jump to search

The Kingdom of Alenshka (French: Royaume d'Alenshque), simply known as Alenshka, is a federal state of the Abeldane Empire. Originally founded as an empire in April 2014, it later became a kingdom in June 2014 following the formation of Abelden. The seat of the federal monarchy, its monarch is also the Emperor of Abelden. At present, Nicholas Kaos is the reigning King.

The most populous state of Abelden since it acceded to the Empire as an independent nation, Alenshka plays a major role in shaping the landscape of state rights within Abelden. The establishment of the General Council, its bicameral legislature, provided the path for a more democratic system of government and the establishment of a new constitution. The Prime Minister, currently held by Stephen Freayth, is the most powerful figure in the kingdom since the King holds little to no actual power in governance of the kingdom. He leads the Council of Ministers and assisted by the Deputy Prime Minister and other ministers.

The word 'Alenshka' comes from the name Alexei, which is a Russian name. Emperor Stephen picked the name from a list of names he created that would be close to the word Alexei and therefore was picked.

Alenhska was founded on 6 June 2014, with Alenshka establishing a personal union with Abelden by, among others, Stephen I & II, who reigned as King. Donald West was the first prime minister. The Kingdom was a founding member of the Abeldane Commonwealth, which was established after the dissolution of the personal union through an Act of the Parliament.

On 31 September 2015, West was succeeded as head of government by Ned Gunderson, whose brief term ended abruptly upon his resignation on 5 October 2015; the position of prime minister remained vacant until the appointment of Patrick Renwick on 17 December of that year; Patrick, in turn, was succeeded by the Baron Figglebert on 17 January 2016.[1]

On 30 June 2016, a referendum was held on whether Alenshka would join the Abeldane Empire as a federal state or remain an autonomous kingdom; a majority of voters backed the annexation and the union was consummated the same day.[2] The Alenshkan King, Stephen, had been the reigning Abeldane Emperor since 2015, and so upon the ascension of Alenshka into the Empire, the two crowns were united, making Alenshka the unofficial seat of the Abeldane monarchy. The annexation meant the transferral of several political autonomies to the Empire, but the internal government structure of the Kingdom remained largely unchanged.[3] Most notably, the Reichsversammlung (the Abeldane legislature) officially became the sole legislative body of the Kingdom, though the body had already been legislating de facto for Alenshka due to the Kingdom's lack of its own legislature and dependency on the Abeldane Commonwealth.

The annexation of the Kingdom brought forth the appointment of Allen Paul, Earl of Eastlands, as the 5th prime minister of Alenshka.[4]

Throughout of its existence as an independent and sovereign state, Alenshka joined several micronational organisation like the Micronational Cooperation Group and the aforementioned Abeldane Commonwealth. It established close relations with micronations like Ruthenia (and later the Karno-Ruthenian Empire,[5] Nedland[6] and Paravia,[7] which remained in place upon its annexation through Abeldane diplomatic institutions.

The geography of the Kingdom varies per canton, making Alenshka the most diverse and different among other states in Abelden. Eidgenossenberg is entirely situated in the flat lands and desert areas in the Arabian Peninsula. Most of the canton is urbanised and thus the presence of large portions of uninhabited desert areas are not available to Eidgenossenberg. Warvoster is primarily located on the Eastern side of the United States, which means most of its geography is situated on tropical areas for Alexton and Deoter-Krenson. Like Warvoster, Preuvenieven is also entirely tropical due to its location in the Asia-Pacific region. Most of its areas are forest and urban areas. Northershingham is located in Europe and primarily in the flat lands. 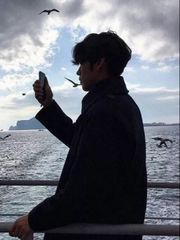 Alenshka is governed under a constitutional and absolute monarchy, with the King of Alenshka being mostly responsible for the decisions within the Kingdom and serves as the head of state.[8] The Prime Minister is the head of government and is responsible for advising the King in matters of the state alongside the Deputy Prime Minister and the Council of Ministers (the cabinet).

Under the federal system implemented in Alenshka, each canton have significant powers on overseeing their respective cities and residents. The Governor of each cantons have a powerful say in the decision making of every canton and therefore are the most powerful officials in every canton.

As in other states of Abelden, federal parties have no jurisdiction in Alenshkan affairs, and as such the Kingdom counts with local state parties of its own. Since 2018, the ruling party of the Kingdom has been the Alenshkan People's Party, headed by former Emperor and incumbent Prime Minister Stephen Freayth. The local branch of the Party of Royalists and Greens holds the minority in both houses of the General Council.

Most of Alenshkans are primarily Christian and the influence can be seen on the government. The King is styled as His Exalted Majesty to symbolise his status as the upholder and protector of the Christian religion within the Kingdom. Even in the coat of arms, the supporters used are angels. Generally, most Alenshkans practice their religion profoundly and attend daily mass every Fridays, not on Sundays because of laws implemented in the United Arab Emirates.

The second largest group are non-believers, who compromise around 30% to 40% of the population. Most of them hold top positions in the government nowadays and the King himself is a declared non-believer. Islam follows in the third place because of the location of the kingdom primarily in the Middle East.

For most of its early history, Alenshka's population was tied to that of Abelden's. Under an arrangement in the Abeldane Commonwealth, Alenshka and Legabelden shared the same citizens as Abelden and thus new citizens of Abelden were automatically citizens of the two kingdoms. When the referendum to accede to the Empire was held for both kingdoms, it was decided to hold it in conjunction with Abelden's referendum.

Since becoming a state, Alenshka has remained the most populous state within the Empire. Although this was nearly broken by the influx of citizens in Legabelden and Sinoland, both states were never able to go above the figures Alenshka had. After the reform of 2018 and the merger of most other inactive states with other active states, Alenshka for the first time held more than 40% of the entire population of Abelden as a result. Its figures nominally have never gone down below 15 citizens and as of May 2020, its current citizen figures stood at 21.

Under the constitution, Alenshka recognises three official languages: English, German and French. English is the lingua franca of the majority of Alenshkans and understood by all of the populace. The federal government primarily uses English on daily correspondence and official documents. German, on the other hand, is not widely spoken compared to other states which have a more sizable amount of residents where German is understood. Its influence is seen on the names of cantons and the fact that Alenshka adopted it as a sign of adhering to the official languages of Abelden. French is widely understood by the populace and Alenshka has a larger amount of French native and learned speakers among other states. It is commonly spoken in the state and the government switches from time to time to French whenever they can.

Other languages present in Alenshka include Arabic and Russian. Because of its location in the Middle East, Arabic is also spoken from time to time and used exclusively in Eidgenossenberg. Most citizens from Eidgenossenberg are able to comprehend and speak Arabic in normal conversations. 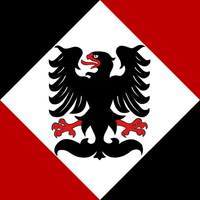 Flag of the Canton of Preuvenieven.

The state has adopted several national symbols to reflect its identity and independence as a nation and eventually as a state. The constitution regulates the designs of the flag and the coat of arms and specifies the description. Most of the state symbols have largely remained untouched since it was granted in 2014.

The flag of Alenshka is derived as a heraldic banner of the coat of arms and was designed by Grand Princess Rachel, who also designed the Abeldane flag. Its design is a blue border around a white field with a red sword superimposed in the centre of the white field. The ratio used is 2:3 and has largely remained the same since it was adopted. White symbolises the kingdom's purity and pursuit of peace whilst blue represents prosperity. The red sword represents the unity and oneness of its citizens when faced with difficulties and dangers.

Its coat of arms is emblazoned as Argent, a sword Gules and bordure Azure. The supporters of the coat of arms are angels, crowned by the Crown of Alenshka and the compartment is composed of branches. The current version of the arms dates back to 2020 but it retains most, if not all, of the elements of the original arms and design granted by the Instürwappadel in 2014.