Patrick I, Emperor of Paravia

From MicroWiki, the free micronational encyclopædia
(Redirected from Patrick Renwick)
Jump to navigation Jump to search

Patrick I, Emperor of Paravia or Patrick Tristan Renwick (born 9 January 2002) is a Norwegian micronationalist and the Emperor as well as founder of the Empire of Paravia, a micronation based in his homecountry, Norway. He established Paravia in November 2014. He was for a short term lasting only 1 day High chancellor of Paravia before stepping down, choosing his father, Sean Renwick to succeed him. He is involved in numerous other micronational governments including that of Beacon City and Archmidian, Nedland and Abelden. He was also involved in the Abeldane Commonwealth. He has also been involved in a number of intermicronational organizations. Most notably the Micronational Cooperation Group, in which he served as Secretary between September and December 2015. In May 2016, after the re-establishment of Nedland as an independent republic, he was offered to become emperor of Nedland by the Nedlandic president, Ned Gunderson. He accepted, and Nedland was transformed into a monarchy under the name State of Nedland. In July 2016, when DRCC Premier Dallin Langford was forced to withdraw temporarily from micronationalism because of school, Patrick was appointed Acting Premier, to serve as DRCC's head of state until Langford returned at an unspecified point in the future. He would later step down from this post following Cinnamon Creek signing the Treaty of Nyros, thereby joining Paravia. Stephen Freayth would succeed him as premier of Cinnamon Creek. In September 2016, Patrick was elected Stellvertreter of Abelden in a landslide victory. Following Vorsitzender Ned Gunderson's resignation a day before the October 2016 election, leaving Patrick to serve as interim Vorsitzender for 4 day, before being defeated by Horatio Eden in the election.

In the April 2017 elections, Renwick running as the DLP candidate for the Vorsitzendership, narrowly defeated Independence Party candidate Will McCracken in a vote in the Reichsversammlung, following a 4-way tie in the popular elections with the Conservative party and the Edge party. Renwick then set about forming a coalition government, consisting primarily of the members of the former Twain Administration. 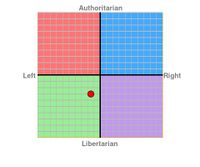 The Emperor on the political compass.

Emperor Patrick was born on 9 January 2002 in the city of Stavanger, Norway to Sean and Lise Renwick. His childhood was relatively uneventful until 2008 when he along with a friend established the Kingdom of Hoppalobindia. Hoppalobindia quickly fell into inactivity and was officially dissolved in 2010. Later in May of the same year his younger brother, the current heir to the throne Prince Imperial Nicholas was born.

In the summer of 2014 Patrick stumbled upon a video about the Principality of Sealand and was intrigued. He started researching more about micronationalism and decided he wanted to start his own micronation. Even though Hoppalobindia had been a micronation, there had been no knowledge about other micronations. After around five months of planning, Patrick established the Empire of Paravia on 29 November 2014. He then took the title Emperor and announced Paravias establishment the following day on the micronation.org forum.

Standard of the Emperor

Emperor Patrick's reign has seen the rapid expantion of Paravia both physically and intermicronationally with a number of diplomatic relations opened with other micronations. It has also seen the acquisition of a large amount of territory in a number of countries. The Emperor's reign Can be characterized as prosperous and peaceful, with the odd bump along the way.

The Emperor made the decision to enter the Pannonian War on the South Maudlandian side against Liberland at the end of May 2015. Despite heavy criticism from other micronationalists towards the war, Paravia was able to get through the war with not too many problems, being the last supporting belligerent of South Maudlandia to withdraw, doing so on the 10th June 2015. This has later been described by the emperor as "his worst decision as emperor".

Paravia however, quickly recovered and the emperor was instrumental, along with Ned Gunderson and Stephen of Abelden in the founding of the Micronational Cooperation Group, in which he served as its first secretary.

2016 would see massive changes to Paravia. First, Patrick was involved in re-founding the GUM, and became the Chief Paravian delegate. Later, he would sign the Treaty of Nyros, which turned Paravia into a federal empire, annexing various other Micronations as federal states, forming a new major Micronational federation.

The Emperor as head of state is also officially the head of all the branches of the Imperial Armed Forces. These include: The Imperial Army, The Imperial Navy and the Imperial Air Force. Emperor Patrick was the commander of Paravian troops in the battle of Skyvik Hill. The battle took place on the 7th June 2015 and was against "Liberlandian" supporters as part of the Pannonian War.