From MicroWiki, the free micronational encyclopædia
(Redirected from Grémmia)
Jump to navigation Jump to search

Grémmia (/ˈgreɪmijə/ or /ˈgrɛmijə/), officially the Grémmian Empire, is a country and a High Imperial Province of the Empire of Paravia. It is landlocked and an enclave of the State of Montana in the United States, and forms the entirety of the Alpine Lands. The country is situated at the foothills of the Crazy Mountains, close to the Yellowstone River.

Grémmia throughout its history has been a neutral power. The October Constitution prohibited declarations of war, and historically adopted a policy of armed neutrality during its possession of an army in May–August 2014. The republican government was overthrown on 27 July 2015[1] and is currently governed by a popular elected monarchy. The constitution remains in a state of suspension. Grémmia ratified the Treaty of Nyros on 20 July 2016 and became a federal state of the Empire of Paravia the next day. On 24 January 2018, Patrick I abolished federalism in 'Imperial Decree XII', and dissolved Grémmia's government. Mikael I remains Sebastokrator of the Grémmians and gained the title of Viceroy of the Alpine Lands.

Grémmia was a full member of the Grand Unified Micronational for four months before the 2013 dissolution of government. The Grémmian government maintains its own newspaper, the Grémmian Wostockle.

There is no known meaning behind the name Grémmia, but it and variants have been in use since the country's formation in 2011. Grémmia is most likely based upon an early Grémmian nonce word, grum.

Officially, the letter e has an accent mark to signify stress on the first syllable (as in Canada). It is usually dropped when diacritics are unavailable or in casual writing.

Before the Treaty of Nyros, Grémmia never absorbed or was absorbed by any other state, instead preferring treaties of free association, which for varying reasons none were ever signed. This relative isolation led to Grémmia developing a unique body of law and norms over several years. Grémmia became one of the few micronations to officially use a form of Common law, and its last constitution, the October Constitution, is largely a revision of the 2013 Constitution, which in turn drew from earlier legal tradition promoting direct democracy and independence.

Grémmia started as a succession of small micronational projects, the Grummian States, the first founded around September 2011. By 11 October 2011, the Grummian States adopted the modern Grémmian flag. The states made accomplishments such as an unmanned solar balloon program in 2012, with two successful launches, and the development of the Grémmiaq Script, the national writing system, and held favourable foreign relations, particularly with Dalton (predecessor of Akebar). and but still lacked political structure, an economy and a significant population.

In spring 2013, the Republic of Grémmia, restored after a brief monarchy, Saint Luke and Amager offered Grémmia Amagerian statehood, but the Grémmian Senate rejected the offer. Later, the Grémmian government applied for free association, but Amager dissolved before the treaty was signed. Grémmia enjoyed good relations with Amager's successor, the Ashukov Federation.

Flag of the Federal Republic of Grunkia

In mid-2013, the Federal Republic of Grunkia was frustrated by crippling inactivity. Grémmian politicians, who were framing the 2013 Constitution, included provisions for free association and asked Grunkia to allow Grémmia to provide defense and control Grunkia's foreign relations. Expressing this might help lessen Grunkia's inactivity, Grunkian president Gunho Kim approved. In October 2013, Grémmian president Mikael Bokmann began writing the treaty. Unexpectedly, Grunkia was attacked by Canadian rebels and civil war followed. In an attempt to settle the conflict, Ònff threatened Grémmia would withdraw from the treaty, but the belligerents reached no ceasefire agreement. After the Grunkian Civil War, the treaty fell through and Grunkia dissolved.

Grémmia was the first of two states (the second being Niclogia) to host a website using the SMITH standard (pSeudo Micronational Internet Through Hosts), which simulated an alternative DNS root using a distributed hosts file, allowing states with limited recognition to have top level domains (Grémmia used .grm as a pseudo-TLD).

The 2013 Constitution was signed and ratified on 20 September 2013. That same day, at 9:01 PM MST, the Landsgemeinde elected Mikael Bokmann President and Willis Karn as Deputy President. The new constitution was a defining document in Grémmian history, codifying principles such as armed neutrality and direct democracy, partially inspired by Swiss cantons. The concept of the Landsgemeinde was introduced to Grémmia by the former Ashukov politician Brooklyn Hewitt. The new constitution was also critical of modern copyright law, and provided for a Common law legal system.

Grémmia became a full member of the Grand Unified Micronational on 26 April 2014 with President Mikael Bokmann as the only delegate. On 8 June 2014, the Grémmian Landsgemeinde rejected membership in the SJEP. Three days later, the Landsgemeinde also rejected a treaty with Ashukovo which would have given Grémmia integrated trade and defense from the Ashukov Foreign Legion, among other provisions of sharing resources. Several Grémmians complained about an unpopular Ashukov presence and "unnecessary" provisions. Reactions from Ashukovs were negative, but no official statement was made. The Landsgemeinde did state after rejecting the treaty they would agree to a free trade agreement with the SJEP member states.

On 24 August 2014, the Grémmian government unanimously dissolved in a peaceful revolution to make way for a more carefully planned and better-funded government. Brooklyn Hewitt and J. Grant Winchester helped draft a new constitution modified from the 2013 Constitution, replacing the weak Presidency with the Regency, allowing executive orders, as well as refining other areas such as nationality law. The current constitution was ratified during the first Landsgemeinde on 17 December 2014.

The second Landsgemeinde declared Grémmia was not interested in rejoining the GUM or any other intergovernmental organization as a full member, but would apply to become an observer state of the Saint Josephsburg Economic Pact. Members of the Christian Democrats have advocated for full membership.

The Landsgemeinde adopted a non-binding body of parliamentary procedure and a binding set of by-laws to run more efficiently. A secretary now keeps records of speech in the Landsgemeinde and committees.

The 2015 Repatriation and Immigration Act, passed 2 February 2015, grew the population from 3 to 11, after residents of Grémmian territory and two foreign applicants became legal permanent residents. The current population estimate is 13.

In response to the creation of a Phantom Navy, consisting of abandoned hulls of ships worldwide, by Lostisland, Grémmia created its first maritime law to defend lost or abandoned vessels and property at sea.

By mid-2015, the Grémmian Landsgemeinde had ceased to convene on schedule, and the Regency expired without any elected replacements. On 26 July 2015, Leon Williamson, J. Grant Winchester, and Mikael Bokmann discussed overthrowing the government and instituting a benevolent dictatorship, with Ònff as sole captain regent. Williamson suggested turning the Landsgemeinde into an advisory body. On 27 July, The coup overthrew the government and published a declaration of a new regime, written by Ònff, which was sent to and distributed by Leylandiistani newspaper Béal na Tíre the same day.[1] The declaration stated the Grémmian people supported the coup, and provided a list of grievances, including the vacancy of the Regency and Landsgemeinde, a slow immigration process, and unnecessary bureaucracy. The declaration suspended all parts of the Constitution except for the enumeration of rights, but the constitution remains unchanged. A provisional government took control 28 July 2015.

On 8 January 2016, former captain regent Mikael Bokmann gained popular mandate to become Emperor of the state as Michael I. The October Constitution was indefinitely suspended, except for articles pertaining to protected individual rights. Because of other obligations from the majority of citizens, government activity drastically declined in the months after the declaration of Empire.

The MicroWiki Community became significantly uneventful in the summer of 2016. At this time, it was also popular for state leaders to hold numerous multiple citizenships and participate in several national parliaments at a time, to prevent "egostans," or micronations largely administrated by a single person. Sectors of the Skype branch of the MicroWiki Community criticised these interlocking parliaments as redundant and a partial source of current community stagnation.

Negotiations on a new federal state, similar in principle to Amager and the Ashukov Federation, began between several heads of state, including Michael I, on 16 July. By 19 July, the Treaty of Nyros was drafted to reform the Empire of Paravia as a federal state containing the original negotiating states, including Grémmia. The treaty entered into force on 21 July.

On 21 January 2017, to solve the issue of an emperor subordinate to another emperor, Patrick I granted Mikael I the title of Sebastokrator, a title lower in diplomatic rank than Emperor, but still befitting the head of an empire.

On 15 January 2018, after a lengthy abandonment of the Riksting by state delegates, Emperor Patrick I by Imperial Prerogative dissolved the Riksting, assumed all state powers, and suspended the legislation forming the Paravian constitution. Nine days later, he promulgated three imperial decrees outlining a radical reorganizing of the empire, including dissolving the federal system and dividing the empire into provinces. Former states other than the Crown Lands, including Grémmia, were given the special status of High Imperial Province. Additionally, he divided Paravia into non-administrative geographical regions called Sectors, and appointed a viceroy for each. Grémmia forms the entirety of the Alpine Lands and has no territory in any other sector. Mikael I was appointed viceroy for the Alpine Lands. 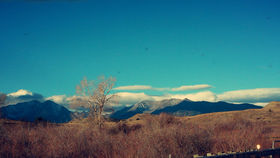 A view of the Crazy Mountains from a distance

Grémmia is very close to the Crazy Mountains, which are visible in much of the skyline. The nearest waterway is the Yellowstone River, and the nearest static body of water is Lower Glaston Lake. The country has a high elevation relative to most other micronations, at approximately 4,100 ft (1,250 m) above sea level.

The Köppen Climate System classifies the climate as humid continental. Summers are mild while Winters can bring several feet of snow. It is often very windy.