Páirtí Aontachta Nua! is a political party based in Pacem, Tusmore (Abelden), led by Robert Dickson (Roibeárd Mac Riocaird in Irish). The Party is not opposed to the monarchy and does not see itself as Anti-monarchy but it does believe in reform of the current system. It believes in Celtic Rule which is a form of Irish led political ideology and Christian Democracy. The newspaper run by the organisation is 'Thoughts' ('Smaointe') and their youth wing is Aontacht Óg! (Young Unity!).

During this time the party was in it’s formative years, Robert Dickson was party leader and held 1 of the 3 senate seats by the end August of 2020. By October Robert had resigned his seat due to differences with coalition parties within the Senate. During December of 2020 Robert was made part of the Tanist council.

2021 was a slow year for PAN, as wider Abelden fell into stagnation so did Tusmore. It was only revitalised when King Kaos and his regent resigned. Robert being the Senior figure in the Council was made King of all Tusmore.

The Kingdom of Tusmore is known to have a small population of Irish speakers and people, seeing that the government was doing little to represent them and the increasing ridicule of their 'odd language' pushed them to speak out. At the forefront of this new revival of the Celtic spirit was party leader(Ceannaire Daoine, known locally) Robert Dickson.

No more shall we be known as the Little People of Celtic Origin, we will make a noise so grand they will have to listen.

— Speech given at the First Gathering (An Chéad Thionól), 26th of November 2019.

The party leader Robert Dickson since then has been very vocal about the importance of the new party in keeping customs and values of the Celtic people of Tusmore alive.

The party is continuing to grow and work is underway on building support from the rest of the Tusmorean people, only time will tell whether the party can make traction with people of Tusmore and across the Empire. 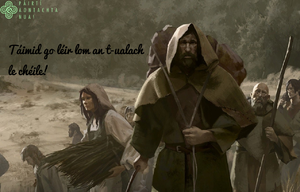 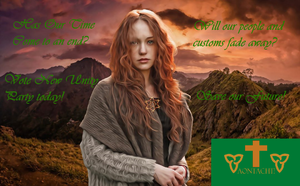 There are many more issues the party is considering but these are the main points they wish to push though the Government.

The Party held one seat in the Tusmorish senate in late 2019 to mid 2020 . This seat was held by party leader Robert Dickson

PAN, The Republicans and PRC-T are were in a grand coalition in the Senate. (May 2020)

The party is scheduled to run again in the upcoming elections after the party leader Robert Dickson declared so to the Tusmorish King. (October 2020)