The 13th Abeldane federal election (formally the 13th Abeldane general election) took place during the period of 20-22 August 2017, following a decision made by the Reichsregierungskabinett. The date originally described in the Elections and Terms Amendment Act 2017 was 1 September, but considerations were taken into place on the turnout of voters and, after a vote in the Reichsregierungskabinett, the date was moved to 20 August instead. The election saw Newton von Uberquie and Artemis Berry Langford elected Vorsitzender and Stellvertreter of Abelden respectively. 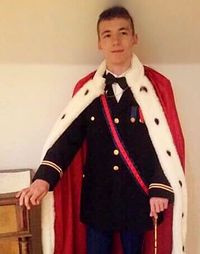 Patrick Renwick, Marquis of Bessatre, has been Vorsitzender since April 2017.

The August 2017 election was the first legislative election in Abelden since October 2016, after which elections to the Reichsversammlung were abolished in favor of direct appointment by the Emperor. They were originally set to take place in September 2017, but were rescheduled by the Reichsregierungskabinett.

The first party to hold primaries was the Federalist Party, on 30 June, in which Benjamin Norris and James Frisch were nominated as Vorsitzender and Stellvertreter candidates, respectively. From 21-29 July, the Social Ecology Party (SEPA) held its nomination process, which concluded with party leader Newton von Uberquie and Queen of St. Castle Artemis Langford as its candidates for Vorsitzender and Stellvertreter.

In late July, a conversation between several key figures of the Empire discussed on how inactivity would grow into the coming school year of both Europe and American Abelden citizens. It was later motioned on 2 August, and was approved on midnight on 3 August, which then set the election date for 20 August. On the same day of the motion passing, the Social Ecology Party released a manifesto.

Brandon Wu had been the Vorsitzender candidate for the the Independence Party of Abelden in presumptive fashion since 3 August, and Avro Keatings was also presumed to be the IPA's Stellvertreter candidate. On 8 August, Edwin Farrar announced he would not be running for Vorsitzender, and confirmed the Labour Party's support for SEPA's candidates.

Composition of the Reichsversammlung running up to the August 2017 election.

For the first time in Abeldane history, the August 2017 election implemented the single transferable vote (STV) system of proportional representation for seats of the Reichsversammlung, as per the Electoral System Act adopted in July 2017. MPs were elected from five electoral districts that encompassed two or more federal states and had a similar number of electors. Each district sends three MPs to the Reichsversammlung, for a total of fifteen MPs. The Reichsversammlung with fifteen elected members was a considerable change from the 37-strong Parliament currently in place.

Additionally, the positions of Vorsitzender and Stellvertreter were elected with the single-member analogue to STV, instant-runoff voting, which also employs ranking as a form of vote.

Logo of the ANP.

Patrick Renwick announced on 2 August 2017 that he had no plans on running for a fifth term as Vorsitzender after the rescheduling of the elections. The ANP did not not forward any candidates for Vorsitzender in Renwick's stead, and did not nonimate any Stellvertreter candidates either, instead standing solely in the legislative elections. Nick Kaos, Alex White, Isabelle Dominique and Renwick himself were the party's contenders for seats in the Reichsversammlung.

The Independence Party (IPA) nominated Brandon Wu (the party's provisional leader following Henry Twain's resignation) and Grand Duke of Dolangrad Isaac Reuel as their candidates for Vorsitzender and Stellvertreter. It was widely speculated that incumbent Stellvertreter Avro Keatings would be nominated for a second term, but the federal monarch was chosen instead when the party's manifesto was released. On 10 August, Patrick Renwick announced his party's endorsement of Wu in the Vorsitzender race.

Logo of the Labour Party of Abelden, which merged with SEPA to form ASE on 9 August 2017.

On 3 August 2017, the Social Ecology Party (SEPA) released its manifesto - being the first party to do so - which announced plans to create a haven of free thought within Abelden.[1] SEPA announced all of its candidates for the Reichversammlung shortly thereafter, including both party leader Newton von Uberquie and Stellvertreter candidate Artemis Langford in the same district. David Ross and Mark Kavanah completed their list in District 2.

On on 8 August 2017, the leader of the Labour Party, Edwin Farrar, stood down from the Vorsitzender race, later confirming that his party would be supporting all of SEPA'S candidates instead. The day later, on 9 August, SEPA and the Labour Party officially merged to become Abeldane Social Ecology, a unified party of the left. Subsequently, an internal election for General Secretary began, which was eventually won by former Labour MP Tarik Kârjasary. Kârjasary and Farrar became part of SEPA's (now ASE) candidates, giving the new party representation in every district but 3 and 4.

On 10 August, Patrick Renwick announced his party's endorsement of Langford in the Stellvertreter race. In the Vorsitzender race, however, the ANP decided to back the IPA's Wu instead of the ASE's von Uberquie.

The Federalist Party nomination for Vorsitzender was given out multiple times; first, it was granted to Benjamin Norris, who subsequently gave up the nomination citing a lack of popular support for either himself or former Federalist Vorsitzender nominee and party leader, Michael Brazeau. The nomination, after revocation by Norris, was granted to Edward Daniels, who later announced his resignation from micronationalism. Michael Brazeau was the presumptive Vorsitzender nominee for the party until 19 August, when he dropped out of the race to endorse the Rhinoceros Party's Horatio Eden.

The Federalist Party also nominated James Reginald Frisch as Stellvertreter. Frisch has complained repeatedly about a lack of consultation from the party leadership over the party's nominee for the Vorsitzendership.

Logo of the Rhinoceros Party of Abelden.

The Rhinoceros Party of Abelden nominated former Vorsitzender Horatio Eden as their party's Vorsitzender nominee on 8 August 2017. Eden confirmed that the party would release a "statement of intent" by 10 August. The RPA manifesto ended up being the largest and most detailed legislative agenda in the election, and possibly in Abeldane history. Despite previously being a member of the Independence Party, Eden became the Rhinoceros' leader after sensing the IPA was a party "in a death spiral toward stagnation".[2]

Eden eventually endorsed James Frisch in the Stellvertreter race, while Michael T. Brazeau endorsed Eden after stepping down from the Vorsitzender race. This led to speculation about a possible Rhinoceros-Federalist coalition should Eden and Frisch won their respective races.

Legislative elections were held on 20 August 2017 and allowed fifteen seats in the Reichsversammlung to be elected using single transferable vote. The Reichsversammlung Seats Act 2017 was passed on 21 August 2017 and allowed the creation of an appointed seat by the Monarch and an automatic seat for the Emperor. On the same day, James Reginald Frisch was appointed to the one lone seat by the Emperor and gave the Federalist Party a gain of a seat.

The election for Vorsitzender took place two days after the legislative vote, on 22 August 2017. It used the instant-runoff voting system, which employs ranking as a form of vote. This was the first executive election in Abeldane history to employ this method.

The leader of Abeldane Social Ecology, Newton von Uberquie, won the election with 48.28% of the vote, beating the Rhinoceros Party's Horatio Eden (32.76%) and the Independence Party's Brandon Wu (17.24%).

Composition of the 7th Reichsversammlung.

Following the election, the lame duck 6th Reichsversammlung passed the Reichsversammlung Seats Act 2017, which gave the Emperor a reserved, unelected seat in the legislature and the power to appoint a hand-picked MP. Once the Emperor took his new special seat, his vacancy in District 1 was filled by Alex White of the ANP, despite the RPA's Allen Paul being the fourth most-voted candidate. Paul refused the offer to take the seat following his decision to form a state legislature in his home state of Alenshka. The Emperor's pick for the appointed MP was James Frisch, who had lost in the race for a seat in District 5.

On 23 August 2017, von Uberquie and the Emperor unveiled the 26th ministry of the Abeldane Empire, a three-party coalition of the ASE, the IPA and the ANP. Von Uberquie commented, of the coalition: "[it] had been in the works since the last cabinet, as our parties already had a vested interest in working together again [...] It was lucky that our partners seemed to agree with the ASE that our more active party would fare better as the primary contributor to Ministries."[3]

On 25 August, Horatio Eden of the RPA was named Leader of the Opposition by the Emperor, succeeding Michael Thomas Brazeau of the FP, who had been in the position since 6 June 2017.