Following the reforms in 2018, elections for the executive and the legislative were staggered and the term for the Reichsversammlung were extended from 3 months to 6 months. Populares is currently defending its absolute majority of 8 seats whilst the party of the Vorsitzender Edward Daniels, Liberty Front, is currently aiming to increase its seats. Social Ecology is defending its lone seat and had original 2 seats following the resignation of Artemis Langford.

The Reichsversammlung originally had a four-month limit on its legislative term until the 2018 Constitution extended the legislative term to six months. It was also decided that the executive and legislative elections were to be staggered and the last election held where both were held was in December 2018. Ever since then, the first only executive election since June 2017 was held on March 2019, where it saw Edward Daniels of Liberty Front elected as Vorsitzender and Charlotte Katrinsdottir of Populares as Stellvertreter.

The current legislative term, the 10th Reichsversammlung, has overseen two executive elections and two Vorsitzenders and Stellvertreters. Under the Kârjasary ministry, a grand coalition of all the parties were formed and the first since Henry Twain. It oversaw reforms within the government and the Empire in general. After the March 2019 election, Edward Daniels was elected into the Vorsitzendership and retained the grand coalition formed by Kârjasary. The Daniels ministry retained most of the ministers under Kârjasary's term and remains to this day the current composition.

Party-list proportional representation system is used for the electable seats and the Droop quota is used for allocating seats to parties. Each parties get to submit a list of members who wish to be elected in the Reichsversammlung and must not exceed the total number of elected seats. Members under the party list are ordered accordingly at the discretion of the party and they have to belong to the same party as their party list.

Currently, there are ten electable seats and the constitution allows for diminishing or increasing these seats. Seats were last increased or diminished on December 2018, where the current 10+2 seats were implemented. 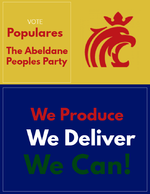 Populares campaigned under the slogan “We Produce, We Deliver, We Can!”, coined by Stephen Freayth. The final party list was decided on 17 December, following internal party discussions. The party program cantered around a commitment to states’ rights, environmentalism, pragmatism and the introduction of a working Abeldane economy. The campaign itself consisted largely of the spreading of the party’s various campaign posters and a call on Abeldanes to vote for the party.

The table below lists parties currently represented in the Reichsversammlung.

Polynomial regression of polling for the December 2019 Abeldane federal election