Peerage of Sabia and Verona 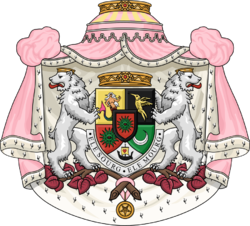 Greater arms of the King of the Valtirians.

The peerage of Sabia and Verona (Sabian: raiagsiná) is a legal system comprising both hereditary and lifetime titles, composed of various noble ranks. The term peerage can be used both collectively to refer to the entire body of nobles (or a subdivision thereof), and individually to refer to a specific title.

Peerages are created by the Sabioveronese monarch, like all other honors in the Kingdom, being affirmed by royal decree. Although Sabia and Verona is a parliamentary democracy, the Sabioveronese constitution deems the peerage system to be entirely a "matter pertaining to the Monarchy",[1] and so peerages in Sabia and Verona have been entirely regulated by the Nobility Titles and Honors Law from 2014, adopted when the Kingdom separated from the Juclandian crown.

Nobility titles in the Sabioveronese peerage system are purely honorary, and hold no practical or administrative functions. However, most human nobles of Sabia and Verona are enrolled in the Book of Electors, the official list of eligible candidates to be elected King or Queen of the Valtirians. Since Sabia and Verona recognizes plush toys as citizens with constitutionally-protected rights, peerage titles may be created for plushies; most of these are considered lifetime titles. No plushie is eligible to be enrolled in the Book of Electors.

Despite having been a constitutional monarchy since its formation in 2012, peerage titles did not exist in Sabia and Verona until 2014. The Sabioveronese peerage system was established by the Nobility Titles and Honors Law in 2014, which was originally proposed by Bertrand Rivière, conservative prime minister from 2014 to 2015. The Nobility Law amended the 2014 Constitution of Sabia and Verona to allow citizens to be granted titles of nobility, an honor that was previously banned in explicit fashion.[2]

Peers are of four ranks, in descending order of hierarchy:

There are no gendered variants for any of the nobility titles in the Sabian language. It would technically be correct to call a (female) Sabioveronese duchess a duke, or vice-versa. However, the gender distinction is usually done in Spanish, the secondary legal language of the Kingdom, and in other languages by government sources as well.

In 2019, the title of ravái ("prince") was issued through royal decree in the same manner as a peerage title by King Tarik for the first time. The title does not exist in the present hierarchy established by the Nobility Titles and Honors Law, and no additional decrees were issued specifying whether the title was a new rank in the peerage system. The only precedent for the creation of such titles is the formality of "Protector of the North", granted to the Queen emerita. Traditionally, the style of prince has been granted to members of the royal families who are enrolled in the Book of Electors.[3]

In the case of all titles ranking higher than aribarág (unless another aribarág of the same surname has already been created), a territorial designation is added to the peerage title. Territorial designations in titles are not updated with local government reforms, but new creations do take them into account. The adoption of the Nobility Law of 2014 coincided with an important overhaul of the administrative divisions of Sabia and Verona, which saw the introduction of a fourth-tier category of territorial subdivision: the parish. Most of the titles created during this time were associated with parishes. The parish subdivision was abolished in 2016, but most of the titles that correspond to them remain in use.

Additionally, there have been instances of Sabioveronese titles with territorial designations outside of Sabia and Verona's claimed territories, such as the marquisate of Arasi (for the gardens, or arasi, of Ħanjago, near Alios and Esmondia) and the dukedom of Ixuħreti (for the Argentine city of Morón, known as ixuħreti in Sabian).