In this traditional Sabian name, Kodavái is the matronymic and Keruin is the family name.

Apollo Osrik Cerwyn (Sabian: abolo-osrik kodavái keruin) is a Sabioveronese politician and poet, currently serving as the 9th Prime Minister of Sabia and Verona. He is the leader of the Democratic Party (HG), the largest party in the unicameral Parliament, and serves as Secretary of Diplomacy in his own cabinet. Before leading the Democrats, he led the Left Alliance, the predecessor to the HG, and was Leader of the parliamentary Opposition from 2017 to 2019.

He previously served as Deputy Prime Minister of Sabia and Verona and Secretary of Diplomacy as part of the coalition government (2016–17) headed by Shounn Virny. Cerwyn is a member of the Sabioveronese Parliament representing the multi-member list constituency of Alios.

Cerwyn is a native Sabian of Caenian origin. He is the brother of fellow politician and President of the National Bank, Hidram Cerwyn. Despite being originally from Caenia, Cerwyn belongs to the Pashqari minority of Sabia and Verona and moved to Tegula shortly after the foundation of Sabia and Verona in 2012. He graduated with a degree on law at the University of Elinore in 2013, and earned a second degree on political science from the same University in 2015.

Cerwyn started his political career in the Strawberry Party. Though he had brief interactions with the Free Suyu Front, he disliked the extremist nature of the Front's tactics, and favored the peaceful approach of the Strawberry Party. At the May 2013 general election, Cerwyn was elected to serve as boxunentir of the Courts of Sabia and Verona for Tegula. His first term in the Courts were marked by his support of the recognition of the Pashqar language's status as official language in the Kingdom.[1]

Cerwyn was a part of the conference that joined the Strawberry Party and the FSF into the Roots Party. Representing Roots, Cerwyn became Minister for the Environment in the Karasal Treaty-forged national unity cabinet formed by Napoléon Bleuberrie following the May 2013 election.[2] He was succeeded by Ryam Piper. 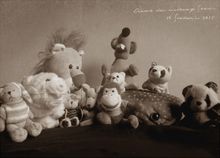 Photograph of the Congress of Salisse on 18 August 2015; Cerwyn is the third from the left, in front of Léon Galieri.

On 16 August 2016, Cerwyn became one of the participants of the Congress of Salisse, and as such is credited as a co-author of the present constitution of Sabia and Verona. Upon arriving in Alios, Cerwyn became involved in the Isadoran University of Darmosari, teaching law and political science and giving conferences on the legal development of Sabia and Verona and Sabioveronese history.

In May 2016 he was selected by Left Alliance members to become the party's next national leader, following the party's merge with Bakinn (Convergence).[2][4]

In the 2016 general election, Cerwyn led the Left Alliance to a third place and a much higher percentage of the popular vote than anticipated in polls.[5] With no clear majority, the table was set for negotiations between the National Artists' Guild (DSN), the second-largest party led by Prime Minister Shounn Virny, and the Left. Virny and Cerwyn spearheaded the negotiations which culminated on 22 September when it was announced both parties had reached an agreement and would form a coalition government.[6]

On 1 October 2016, Cerwyn assumed the posts of Deputy PM and Secretary of Diplomacy in the 8th government.[7]

Right from the start, there were tensions within the coalition government.[8] By January 2017, a mere two months after the inauguration of the government, Cerwyn was openly criticizing Virny and the Artists for not "listening to the Left's concerns", namely the topic of constitutional reform.[9] Virny's refusal to consider constitutional reform became a major strain in the coalition, in the aftermath of Leftist cabinet secretary Andreina Rossini over comments criticizing the Prime Minister.[8] It was then that Cerwyn approached the leadership of the Liberal Party to discuss a possible joint initiative to push for constitutional reform.[10] An opportunity was opened for Cerwyn and the Left-Liberal axis with the "La Plata incident" on 25 January, when Virny made a brief one-day visit to the city of La Plata, Argentina, on the day an extraordinary session of Parliament was scheduled. The unannounced trip took the government and the nation by surprise, and caused outrage and widespread condemnation.[11]

Riding the wave of discontent against the PM, the Left and the Liberals orchestrated peaceful demonstrations against Virny and calling for constitutional reform, as well as his resignation. On 14 February, Virny finally gave in and allowed Guild lawmakers to allow a constitutional referendum to take place.[12] The referendum was held on 5 March 2017, and resulted in a landslide victory for the reformist camp and the resignation of Virny from the leadership of the Artists.[13] The Constitutional Assembly formed in the aftermath of the referendum finished writing the new constitution on 20 April 2017.[14]

The 2017 general election resulted in major gains for the Left Alliance, which became the second largest force in Parliament with 29.4%. Having ruled out any further collaboration with the Artists, the Left positioned itself as the main Opposition to the new new Liberal government led by Noa Dargany. As the Left's leader, Cerwyn took the position of leader of the Opposition.[15][16]

In October 2017, the Left Alliance entered talks with a dissident faction of the National Artists' Guild, led by Snø Jens-Galieri.[17] Talk of a 'leftist superfront' (so-called because it would group together all the left-leaning forces in Sabia and Verona) had existed since early 2017, when the DSN, once the Kingdom's largest party, began dwindling due to a number of factors.[18] The Democratic Party (horói geñkurago in Sabian, lit. "Party for the People's Government"; HG) was founded on 28 November 2017, with Cerwyn at its helm.

Under Cerwyn's leadership in the Opposition, the Democrats negotiated extensively with Dargany's government to reach an agreement on the New Frontier plan; Dargany's inability to sway the HG resulted in her losing a leadership spill against Andrew Blackhorse in late 2018 and the subsequent dissolution of her government.[19][20] Blackhorse's administration finally reached an agreement with the Democrats in 2019, when the New Frontier plan went ahead and the territory of Doga Runann was claimed by the Kingdom.[21] 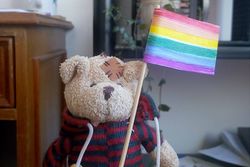 Cerwyn with a rainbow flag celebrating International Day Against Homophobia, Biphobia and Transphobia in 2020.

The Democrats were rewarded with their best-ever result at the 2019 general election, gaining over 55% of the vote and achieving the first parliamentary majority in an election by any political party since 2015.[22] Cerwyn was shortly afterwards granted the King's mandate to form the 12th government of Sabia and Verona, which took office on 3 June 2019 when it was confirmed by the 5th Parliament in its inaugural session.[23] Cerwyn's government saw the return of Snø Jens-Galieri to the Commerce Division and Kastor Gevras Drigy to the Justice Division.

Early into his mandate Cerwyn's government was threatened by internal disagreements over the issue of the Northern regions, which was sparked by education secretary and Democratic Party deputy Soraya Hreti's opinion piece on The SiV Phonograph, which called the rest of the government to act swiftly on the Northern question.[24] Cerwyn later defended Hreti and stated that his government was merely "pluralistic in views".[25] Cerwyn would later mandate the establishment of a special parliamentary commission to assess the situation and deliver a non-binding verdict on how the government should proceed on the Northern question.[26]

In December 2019 Cerwyn's cabinet spearheaded the campaign to amend the 2017 Constitution for the first time since its adoption in order to make the Spanish text fully gender-neutral and extend by one year the term of magistrates of the judiciary;[27] the amendments were subjected to a popular referendum in which they all passed by an ample margin.[28] Cerwyn was credited for opening dialogue channels with the opposition, led by Shounn Virny, to allow the amendment proposals to pass through Parliament with relatively unanimous support.[29]

Toward the end of 2019 the government released the Jens-Galieri report (so named as it was elaborated by Snø Jens-Galieri), the first integral economic report in Sabia and Verona since 2016; the report noted a moderate growth of Sabia and Verona's economy.[30]

Cerwyn is an atheist. He speaks Sabian natively and was a proponent of the introduction of Pashqar in the everyday culture and society of Sabia and Verona. He became a member of the Pashqar Language Authority in 2014, and was one of the authorities who declared the language extinct in 2015.

He is rumoured to have dated both Democrat MP Andreina Rossini and Liberal MP Shassel Marlaryen.[31]