Sabia and Verona held its sixth general election on 20 September 2015. It was the first election held under the new constitution, which established a new unicameral parliament, instead of the old bicameral Legislative Courts. It was also the first election held in the aftermath of the Haronos Plan, a state-sponsored program in which new territory was claimed for the Kingdom in Argentine territory, and a new capital, Alios, was formed in the new land. The Haronos Plan shifted the balance of powers in the Kingdom considerably, and much of the population found itself unable to vote in the new election due to the new constitution.

Former Prime Minister and leader of the Unity Party, Bertrand Rivière resigned in the wake of the Haronos Plan, and Andrew Blackhorse took over his lead of Unity. Factions of the Left Alliance and the Convergence Party formed the National Artists' Guild, led by newcomer Shounn Virny. The Artists received a supermajority in Parliament, and formed a majority government with Virny as prime minister.[1] The election's turnout of 100% was the highest recorded turnout in all of Sabia and Verona's history. 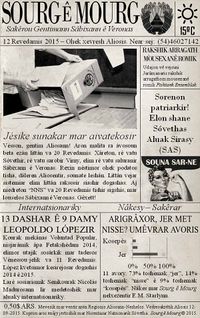 The sixth general election took place over a year after the previous election, in which PM Bertrand Rivière was elected. Rivière served a whole year as it was indicated in the 2014 constitution, adopted during the previous administration of Léon Galieri. The election takes place amidst a period of transition and change in Sabia and Verona, nearly a month after the adoption of a new constitution, the coronation of a new king and the move of the capital to a newly established city, Alios. The statutes of the new constitution, first drafted at the Congress in Salisse and later adopted by royal decree by recently crowned King Tarek on 25 August, stated elections for national institutions were from now on to happen only in the new capital of Alios, and that only Aliosik citizens would be allowed to be nominated to the Parliament or the new Tribunal. This concession meant that the number of voters would now be considerably smaller.

Once the Haronos Plan was executed, Sabioveronese politicians in Alios assembled in ideological groups, generally with little regard for old Sabioveronese parties such as the Left Alliance and Convergence and Amity. Members of these two parties abandoned their memberships and founded the National Artists' Guild (DSN), which rapidly became the largest party in Alios. Opposition to the DSN manifested in various forms, predominantly the form of the Unity Party or independent politicians, which on 9 September 2015 became the Sabian Democratic Assembly (ASD).

Composition of the Parliament after the 2015 election.

The election resulted in an absolute majority for the National Artists' Guild, which formed a single-party government headed by Virny, who became the Kingdom's 6th Prime Minister, the first of its kind since the first government. To this date, the National Artists' Guild's resulting parliamentary representation of 70% remains the highest figure of representation for a single political party in Sabia and Verona's national legislature. The Unity Party became the Official Opposition, and Blackhorse became its leader. The other traditional parties of the Kingdom; the Left Alliance, Convergence, Initiative for Democracy and the Pashqari People's Party, all lost nationwide representation. Only the Left Alliance would recover it, in the next general election.

Due to its reduced size (the smallest of all legislatures since the Kingdom's establishment), the 1st Parliament is often nicknamed the "Little Parliament" in Sabia and Verona.