Justinian Theodorism is a form of Theodorism developed by Basileus Justinian I of Burnham and Brooklyn Hewitt which seeks to establish socialism through a more peaceful means. Like it's predecessor, it advocates soviet/council democracy, workers' self-management, the abolition of social classes which are based on wealth and a monarchy to oversee the implementation of socialism and hold reserve powers to maintain the Theodorist system.

On 26 July 2013, Brooklyn Hewitt and Justinian I wrote an essay entitled "Red Summer: An Essay on Justinian Theodorism." It was unveiled to the micronational community through Facebook and Skype groups.

Unlike Orthodox Theodorism, Justinianites seek to establish socialism as the final goal of Justinian Theodorism. Justinianites argue that communism is often associated with violence and aggression on the part of the Communists. To support this, Justinianites point the Orthodox Theodorist document "The Vanguard Monarch" by Jonathan I of Austenasia describes the Supreme Soviet as “the monarch’s instrument in crushing counter-revolutionary forces.” Justinian Theodorism’s final goal is to transit to a Socialist state, whereby violent elements are curbed, and other Leftist movements can be allied with or made subservient to the Supreme Soviet, instead of being crushed or removed as per Communism.

One point where Orthodox and Justinian Theodorist points meet is where the monarchs of both variants of Theodorism are cultural symbols and figureheads. However, Orthodox Theodorism does not capitalise on this, leaving the Supreme Soviet or another legislative body to decide on the Monarch’s role in the country, if any. Justinian Theodorism is very clear in that the Monarch has absolute control over all elements of the nation’s culture that does not interfere with the National Calendar. The Monarch may also be bestowed other positions and roles within the nation as per Orthodox Theodorism. 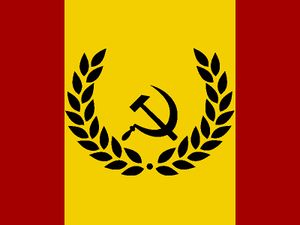 Flag of Theodorism and Socialism in Burnham. Flag of the Theodorist Workers' Party of Burnham.