Avidism is a political ideology which was developed by Abrams Wiucki-Dunswed as a theoretical model for an ideal intermicronational organizations government, deriving concepts both from Council communism and a Yes/No voting system. It advocated councilism.

Despite gaining barely any popularity abroad, with one intermicronational organization adopting variants of the original idea, it is still used.

Avidism was created on 27 September 2018 by Abrams Wiucki-Dunswed, On school campus where his AVID elective class had to sit in a circle of chairs and describe why the acts on the earlier day were insufficient and non-productive.

Wiucki-Dunswed saw a form of government possible in the sense to strengthen the education system and established better productive work ethics.

Avidism was officially unveiled on MicroNations Fandom as a "form of council based government including a voting system".

A few weeks later, the Concordat of Micronational Leagues sent a reform to change to an avidist organization. 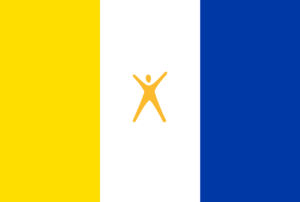 A flag based on off Avidism.