The Free City-State of Edenopolis is a small, self-styled 'independent' unitary city-state within the United Kingdom; however, given its lack of recognition by actual nation-states or the United Nations, it is what is normally termed a "micronation". It occupies, according to the first Royal Edict passed by its King, the territory between the "Imperial Hall of Justice to the North" and the "First River to the South".[1]

The country's territory is divided into three contiguous departments that stretch from the Imperial Halls of Justice in the northern regions to the First River in the south. The City-State has no sea border, and it shares its land border with the United Kingdom on all sides. It does not possess any overseas territories.

The city's de facto capital and single largest City-District is Los Papangeles in New Kronsborg, which also hosts all of the nation's diplomatic missions and is the financial capital of the country.

The City-State is an absolute, nominally elective (though effectively dictatorial), monarchical state, ruled by its King, Horatio Eden, who has absolute legislative and executive power. The first Royal Edict enables him to appoint and dismiss a Board of Royal Advisors to advise him on matters of state,[2] and the board presently has three members. The board is the closest public body to a deliberative legislative assembly the nation has on the national level.

Despite being founded by the same person, the country, unlike many of its predecessors, bears no legal or diplomatic relation to the Federal Republic of Whestcorea, United Seats of Whestcorea or the Realms of Valdsland, though the King's present formal title includes both "Lord Executor of the Valdslandic Realms" and "King-in-Exile of Whestcorea".

The name "Edenopolis" was first used in Royal Edict 2016-11-I,[3] to refer to the city-state being created by its terms.

The name "Edenopolis" comes from the root word "Eden", after its founder, Horatio Eden, and the suffix "-opolis", which comes from an Ancient Greek term meaning "city-state", which is additionally where the terminology "Free City-State" in the nation's name comes from.

The nation was established on the 5th of November, 2016, by prospective-King Horatio Eden; the Royal Edict establishing the nation sets out their claim to all of the territory between the "Imperial Halls of Justice to the North" and the "First River to the South", though it is unclear what geographical locations these place names actually refer to. Over the next few hours, a succession of legislation creating the various organs of state, setting out the legislative process, and formalizing the foreign affairs process were created.

On the same day, the fifth of November, a treaty of mutual recognition - known unofficially as the Treaty of Pleston, after the Abeldane city in which it was signed - was ratified between Edenopolis and the Abeldane Empire and the Commonwealth.

Additionally, both a referendum and a Kingship election were called on the day of the City-State's establishment; the former approved the official flag design of the nation, while the latter returned an electoral victory for the incumbent King with 100% of the vote.

Following the signature of a treaty of mutual recognition with Shorewell on the 6th of November, 2016, the King's fifteenth Royal Edict of November created the Royal Ambassadory, headed by the Royal High Ambassador (presently himself). 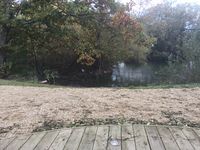 The First River, marking the southernmost border of the City

The Free City-State is roughly 220 feet above sea level. The City itself is mostly flat and paved over, though there are a select few green spaces just due north of the First River. However, the general area is rather built-up, with a large building complex inbetween the Royal Capitol Building and the Imperial Halls of Justice.

The geography of the nation in general is, however, difficult to ascertain; the legal boundaries of the City are set only between the Halls of Justice and the First River, with no attention given to the latitudinal extent of the country. As such, it is unclear what geographical phenomena exist within the City-State as the borders of the country themselves are unclear.

The climate varies from area to area. Los Papangeles is consistently a steady warm temperature, while the remainder of the nation's territory fluctuates based on the prevailing conditions of the United Kingdom, which surrounds it on all sides.

The political system of Edenopolis takes place within the framework of an absolute monarchy, in which the King has total legislative and executive power. While the first Royal Edict creating thhe office of King also creates a Board of Royal Advisors, their position is entirely advisory, and thus not legally binding.

All legislative and executive power within the government of Edenopolis is vested entirely in the office of the King, who can pass and repeal Royal Edicts that have the power of national law. Furthermore, while the King is, in theory, elected - with the incumbent King passing a law within the first twenty-four hours of his reign declaring that an election for his position would be held - the legal system is such that only "full" citizens may vote, and only the King is presently a full citizen.

The King may appoint and dismiss at his discretion a Board of Royal Advisors, headed by a Chief Executive, to advise him on matters of state and public policy. This Board does not have the power to pass Edicts, however; instead, it passes Resolutions, which are similar to Acts of Parliament in a Westminster system insofar as they require the final approval of the monarch to become law.

The King can, nominally, be elected; however, in practice, the King has no term length or term limit and serves until abdication or death.

Legislation comes in the form of Royal Edicts and Resolutions. Royal Edicts are those missives that have been published by the King directly and automatically achieve force of law, and so far this form of legislation makes up the entirety of the legislative lexicon within the nation. Resolutions are those Acts that are passed by the Board of Royal Advisors and passed to the King for ratification; however, given the lack of such a Board, no Resolutions have yet been published.

Various Royal Edicts have created a number of executive agencies within the City:

The posts of Royal High Ambassador, Royal Police Commissioner, Most Loyal Chancellor and Royal Commissioner of the Imperial Halls of Justice are all posts currently held by the King, though the King maintains the ability to delegate these posts at any time.

Embassy Row, where all diplomatic missions to Edenopolis are housed

Main article: Foreign relations of the Free City-State of Edenopolis

So far, the Free City-State of Edenopolis has achieved mutual recognition with three nations, the United States of Wings - the President of which also serves as the Lord Mayor of the Edenopolitical capital city of Los Papangeles - the Abeldane Empire and the Commonwealth and the Empire of Shorewell, and has unilaterally recognized a number of others, including those nations that are recognized by the United Nations. In addition, it has formed the Edenopolitical Lounge, a Skype room which the City-State "claim[s] as our embassy to the internet micronational community".[4]

Royal Edict 2016-11-XVI[5] created Embassy Row, which houses all of the diplomatic missions to Edenopolis. 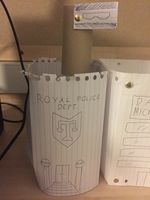 The national headquarters of the Royal Police Department.

The Edenic Royal Police Department is charged with the responsibility to enforce the law. The first Royal Edicts set out a number of crimes against the state, including "high treason", "littering", and "spamming the hitmarker sound in voice chat". So far, no criminal activity has been recorded or acted upon.

The headquarters of the Royal Police Department are in the Royal Capitol Building, next door to the Daily Micronational Tower.

The City presently has no economy; references to "fines" as consequence for criminal activity have been made, but no formal national currency has been created by any national law.

Only the Daily Micronational has so far covered the nation of Edenopolis in the news media; it released, on the sixth of November, a news story regarding the creation of the nation.[6]

There are plans to create a true national news agency, but such plans are still in their infancy.

The flag of the Edenopolitical City-State.

The flag of the City-State is a horizontal rectangular tricolour of dark red, white and dark red again, with a pair of pixelated sunglasses defacing the center. It was adopted in its present form as a result of Royal Edict 2016-11-III, after a referendum gave the prospective design 100% of the support of the populace, on the 5th of November, 2016.

The coat of arms of the City-State.

The coat of arms of the City-State is a shield bearing a white, upward facing arrow on a black background, underneath a white rectangular section defaced by the royal symbol of the ruling family. The shield is lain over a sword, and flanked by two golden lions.

The coat of arms has yet to be officially adopted by law, though the King has already begun using it as his personal standard and thus the standard of the City.