The United States of Wings was a unitary republic within the State of Texas in the United States of America. Due to its lack of international recognition or sovereignty over its territory that can be practically and legally exercised, it fell into the category of a micronation.

The nation nominally seceded from the United States on the 19th of November, 2016, and elected as its first President Emerson Rief and as its first Speaker of the House Horatio Eden, the two who had founded the country. The secession was never recognized by the government of the United States, nor indeed by any other macronational power.

Geographically, the nation occupied around 0.08 km2 of territory, claiming legal sovereignty over a portion of the President's house in Texas, making the burgeoning nation 5.5 times smaller than the smallest internationally recognized macronation in the world, Vatican City.

The origin of the term "United States" is the fact that Wings was designed to be a Union of many "States," in this instance referencing the political subdivision rather than the term for an independent government, of which is also referred to as a state.

The origin of "Wings" is disputed. It had never been clarified whether the original reference cited Paul McCartney's band Wings or the "wings" of an airplane, of which is the latter is the instance it is used to reference in the present.

The government was led by a President (currently Emerson Rief), elected every six months via an electoral college vote similar to the structure used in the United States of America. The President served as the head of state and in a similar position to that of the United States of America, insofar as he or she will likely have a veto power in some respect over substantive legislation.

However, the President was also considered to be an authoritarian position elected by show election. An example of this was the 2016 Presidential Election, where the one elector in the electoral college was Emerson Rief, who was also the only qualified candidate for the office.

The Legislative branch was composed of a Congress, led by a Speaker of the House (currently Horatio Eden), which had the authority to draft and pass legislative bills and laws - though these laws could be blocked by a presidential veto. The one house of the Congress was known as the House of Representatives, and was composed of representatives of the states based on their population at the latest census.

At the time of dissolution, the United States of Wings had the following departments represented in its cabinet:

The United States was organized into States which had limited levels of internal law-making abilities, similar to the United States of America. The States each had their own governor and, when population allowed it, could expand to have full elected legislatures. States could create their own taxes, establish schools and state parks and operate other public institutions.

The States were created and approved by the House of Representatives and the admission was thereby signed by the President. They adopted a flag and other symbols independently of the federal government. At the time of dissolution, there were two states, one of which - the District of Corsair - was the Capital district. The other state, Mustachusetts, was a standard state and was admitted on 17 December 2016.

At the time of dissolution, the United States of Wings had only engaged in relations with five other micronations. Numerous agreements had been signed between Wings and the Free City-State of Edenopolis, its closest ally, notably the North Atlantic Free Trade Agreement (NAFTA) which established the free trade of Yu-Gi-Oh! and other similar playing card games. Signed on the same day several hours earlier was a general agreement between the states. 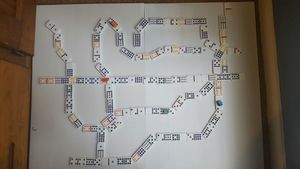 A photograph of the Wingsington Rail system as of 11 December 2016.

The logo of Wings and Stripes, a newspaper in Wings.

At the time of its demise, the only newspaper based on the United States of Wings was Wings and Stripes, a state-owned patriotic online newspaper. It was established on the same day as the foundation of the nation, 19 November 2016, and was one of the first newspapers to report on the Wingian Presidential Election, the Trans-Atlantic Union, and the North Atlantic Free Trade Agreement. The paper had a close relationship with the Daily Micronational.

Wingians also regularly read the Daily Micronational, a newspaper with an office in Edenopolis.