The Trans-Atlantic Union (TAU) is an intergovernmental organization to promote international co-operation. Set up as a bilateral agreement between the Free City-State of Edenopolis, the Commonwealth of Esse, and the Khanate of Nedland. The TAU was established on the 20th of November, 2016, as an international treaty legislating body designed to streamline the process of creating bilateral agreements between the member states. At its founding, the TAU had two member states, the same number it has today. The headquarters of the TAU are in Los Papangeles in the Free City-State of Edenopolis, though as yet does not enjoy rights to extraterritoriality under international law. Its objectives are primarily to streamline the legislative process of treaty writing between nations and thus further the process of international co-operation in the micronational sphere.

The Treaty that created the TAU was drafted by delegates from both Edenopolis and the USW on the 20th of November, 2016, and ratified by both on the same day. The first session of the TAU happened on the 20th/21 November (United States/Edenopolitical time), 2016, in which delegates from both nations agreed to a framework whereby the North Atlantic Free Trade Agreement (another bilateral treaty signed by both nations) would be merged with the TAU, though this has yet to be put into effect.

The TAU has two principal organs: the Atlantic Assembly, the main deliberative assembly where delegates from all nations meet to decide TAU policy and vote on substantive legislation, and the Supreme Court, which is the primary dispute resolution chamber of the TAU, where member and non-member states can go to have disputes mitigated. The TAU's most prominent officer is the President of the Atlantic Assembly and the Trans-Atlantic Union, currently King Horatio Eden of Edenopolis, the term of whom expires on the 20th of February, 2017, and rotates to Henry Twain, delegate of Esse.

The Trans-Atlantic Union is made up of two principal functionary organs: the Atlantic Assembly, led by the President of the Atlantic Assembly, which is the primary deliberative assembly of the Union where motions are passed and substantive legislation is debated and voted upon, and the Supreme Court, which hears disputes between both member and non-member nations (though the latter category must request the use of the Supreme Court for the purpose of dispute resolution). Both of these principal functionary organs are located at the TAU headquarters in Los Papangeles. 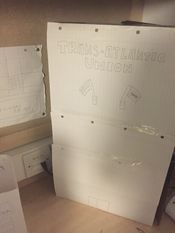 The Atlantic Assembly is the primary deliberative body of the Trans-Atlantic Union. Composed of all TAU member states, the assembly meets at irregular sessions decided upon by the President in concord with the members of the Assembly. The Assembly is led by a President, who also serves as de facto and de jure head of the Union, with the position changing hands every three months as it rotates through the list of national delegates. The first session convened online on the 21st of November, 2016 and had representatives from all two member states.

When the Atlantic Assembly votes on important questions, such as substantive legislation, a two-thirds majority of presently voting members is required. This covers all motions creating legislation that will enter international statute and be binding on those nations that agree to it. All other questions are decided by a majority vote. Each member country has one vote. Resolutions are binding on member states, but only those member states that voted in favour of it and only if the resolution achieves a two-thirds majority.

The Supreme Court of the TAU is the primary judicial body of the Trans-Atlantic Union. The primary purpose of the court is to resolve disputes between both member and non-member states (though non-member states must request the TAU grant permission for the use of the court); this is the responsibility apportioned to it by the Treaty of Formation. It is chaired by a Supreme Justice, nominated by the President of the TAU and approved by the Atlantic Assembly, who serves until removal, resignation or death.

The Supreme Court, too, is based in the headquarters of the TAU in Los Papangeles.

The TAU presently has three members, listed below. The Treaty outlines the rules for membership: