The Nation of Munkkia, or Munkkia is a micronation loctated in Odense, Denmark, with territory in Israel. It was first officially founded on the 15th of June 2014, as The United Nations of Munk, it later became the Republic of Munkkia, then the Empire of Munkkia, before setteling as a nation. Munkkia comprises of around 60m² of territory in the form of four seperate dorm complexes in Odense. Munkkia officially has 8 registered citizens.

On the 15th of June 2014, Jonny Møbjerg, Mathias L. Magnussen and Angutivik-Casper Rúnur Tausen Hansen were standing outside of the dorm-complex where they live. Mathias brought up micronations after reading several articles on it, and wanting to start one himself, he brought up the idea of three independent micronations. Jonny and Casper liked the idea a lot, and started working as soon as they returned home. On the same day, Mathias and Jonny has already created a flag, and a plan for their future, and everyone had come up with a name.

Things went pretty slow between the nations, only a few things were implemented, such as a weapons treaty between Casper and Mathias. It wasn't until the 7. July 2014, almost a month later, that Mathias suggested combining the three nations into one actual micronation. Casper and Jonny agreed, and the Republic of Munkkia was officially formed.

Formation of The Republic

After the formation on the 7th of July 2014, things took off, and only 4 days later, on the 11th of July 2014, the government infrastructure was created, and Jonny Møbjerg was elected president. Mathias was elected Minister of the Ministry of Media, and Casper was elected Minister of the Ministry of Military. The next few days were spent on writing, planing and growing. On the 17th of July, the first Grand Meeting was held over Skype. At this meeting, it was decided that a military force was necessary, so the Munkkia Army was created, and Casper became the Field Marshall. Mathias became General. Two days later, the National Party was formed, after Mathias realised that he had forgotten to create one before Jonny was elected president.

Munkkia claimed its first outside territory on the 24th of July 2014, in Hoptrop, after Munkkia gained a new citizen.

On the 7th of January, 6 months after the formation of Munkkia, the first official election was held, with Mathias L. Magnussen winning, becoming the new president.

Formation of The Empire 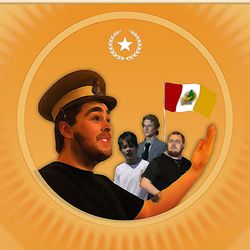 State propaganda from The Empire, portraying The Council

After becoming president, Mathias L. Magnussen turned the National Alliance into the Imperial Lolkian Party, turning The Republic of Munkkia into The Empire of Munkkia, and introducing a new Order, known as "Lolkianism". Lolkianism promoted totalitarianism, voluntaryanism, imperialism and patriotism. It also considered itself very altruist, and maintained that a national elite of intelligent individuals were to form the nation of Munkkia, and grow it as much as possible for it to survive in the future. Mathias L. Magnussen also proposed the consumption of much more territory, and the absorption of other, smaller nations. The Empire also claimed three new colonies, giving it five colonies in total.

The Empire of Munkkia wanted to grow the national economy, and strengthen the governmental structure. The National Bank of Munkkia got a new Chairman, and a new set of banknotes which were put into production on the 5th of February. Four new departments were also established, which were to maintain every interest of the nation.

Main article: List of colonial territory claimed by The Empire of Munkkia

One of the first things done under the new regime was the claiming of three new colonies.

The "Munkkia in Brazil" decleration

On the 29th of January 2015, The Kingdom of Ruthenia, which had been a personal ally with the President of Munkkia for some time, was given a document titled "The Decleration of Munkkia in Brazil". The document was a offer to turn the nation of Ruthenia into Munkkia, and make Munkkia in Brazil an official territory. This would include turning King Oscar of Ruthenia into the national Emperor of Munkkia, making Munkkia a monarchy. A meeting was held in a Brazilian restaurant between the government of Ruthenia. Although Mathias L. Magnussen had offered them to become Munkkian for a while, they declined the offer, wanting to remain diplomatic partners and work on bettering their own nation.

On the 13th of February 2015, after only being an Empire for a month, the Empire of Munkkia was dismantled. Operation Empire had become a distraction from Munkkias original goal, which was to create a unity of people who are dedicated to Munkkia. President Mathias L. Magnussen formally announced the formation of The Nation of Munkkia on the 13th of February 2015, with it came a new flag and a state emblem, which were made to simplify the previous flags and emblems.

The Nation of Munkkia actively announced that they were looking for a monarch in February, and as of March has found and crowned Stephen Freayth, previously of the Abeldane Empire to be Monarch of Munkkia. HIRM Emperor Stephen resigned as Emperor because of dual micronational citizenship and was removed of citizenship of Munkkia.

The Culture of Munkkia

Munkkia is known for its vast selection of musicians. President Mathias himself is an avid player, creating the National Anthem of Munkkia, aswell as several hymns. Angutivik and Mathias play together in the national band, which has produced the official War Hymn, aswell as other Munkkian melodies. Music is a very important part of Munkkian culture, as it encourages community, creativity and can even be used for profit.

The first National Anthem of Munkkia was "Broder, Hold Det Tæt", which was written in 2014 by Mathias L. Magnussen for the Republic of Munkkia. It remained the only national anthem for Munkkia throughout, as it is neutral of any country names, and only relies of the message of brotherly love and unity. The National Anthem was changed to "Thousand Footsteps" on the 19th of February 2015.

Munkkia has proposed the issue of several stamps, which will be used for collection, aswell as postage throughout the Munkkia territories through the National Post Office of Munkkia.

7 July - This marks the day of The United Nations of Munk. This day has no official traditions, as it has yet to be celebrated.

4 August - This marks the day Munkkian officials reunited and formed the Republic of Munkkia, marking the official formation of Munkkia as one unity. This day has no official traditions, as it has yet to be celebrated.

The Government of Munkkia

The Government of Munkkia consists of the President, the Council and the Departments. The President Mathias L. Magnussen is the successor of Jonny Møbjerg, there have been no previous leaders of Munkkia. The Council was formed after the formation of The Empire, and the spread of Lolkianism. Outside of the Departments, the Government has several sub-departments, which include the national bank, postage service among others.

The President of Munkkia is the highest authority. The President has limited power, but can only execute it through the Council, and in some cases through direct democratic votes from citizens. The current President is Mathias L. Magnussen. The role of the President is to steer Munkkia in a right, democratic and just way.

The Council of Munkkia is responsible for everything in the government. It consists of four citizens, including the President. Every member can come up witha suggestion, and if it is voted on, it will be put into action. The President also needs to consult this council before making governmental changes. Members of the council include Jonny Møbjerg, Angutivik-Casper Rúnur Tausen Hansen, Nicolai Marienlund Jensen aswell as President Mathias L. Magnussen. Only an elite group of people can be accepted into the Council, and although the President is democratically voted for, the Council is selected by The President and other members. The President does not have the authority to remove a member, unless it is through a vote from all members.

The Department of National Media is responsible for the state media, design of money, stamps, and the national music. This department was created out of the Ministry of Media. This department also aides startup medias in Munkkia, as startup money is a part of the current Government.

The Department of National Security is responsible for the welbeing and control of the citizens. This department prioritises the healthcare, the promise of social security and the finiancial help for financially unstable citizens. Although there is currently little use of it, as every citizen is covered by the far superior Danish system, it is hoped to have future signifigance.

The Department of Relations and Citizenship is responsible for diplomatic relationships and citizenship. This department issues passports, keeps track of citizens, and has the priviledge of taking away citizenships. Friendship Associations are regulated, controled, maintained and created through this department.

The National Bank of Munkkia issues Munkkoin, controls the circulation, stores money for citizens and are responsible for anything related to the economy of Munkkia

The Economy of Munkkia

Munkkia is a country which aims to become a financial superpower. Munkkia has two official currencies, one of which is printed and managed by the Government, called Munkkoin. The second currency is Danish Kroner, which is the official currency of the neighbouring country, Denmark.

Munkkoin is printed by the Bank of Munkkia and regulated by it.

Munkkia only has one non governmental business, which is