The New German Revolution was a civil war between imperialists of the secessionist Democratic New German Republic backed militias, Rodentian forces and the Federal Union of Wegmat backed Alley Autonomous Province and independent intervention from the United Labour Front. The conflict was considered part of the Great Des Plaines Valley War.

In October 2021, Wegmat and New Germany were reunited 9 months after the Weg-New German War. Weg support was much higher than before; however, the Rodentian-funded Sakaki clan attempted to seize control of Bobbygrad. Weg support fell after federal troops intervened. After the New German-Weg defeat at the Battle of the Bay, Weg support became almost non-existent in Bobbygrad. The NGAP began to show more autonomy after it annexed New German Forest, now known as Braidynburg, Hesshnia, and Wüntternia. During a diplomatic visit of the Wegmat Prime Minister, Cole B., Vladimir Baruh declared the revolution had begun. The Prime Minister was evacuated as armed militia took key governmental building, including the New German Capital and Weg Federal Consulate.

Anarchists take control of remnants of the Autonomous Province

The newly popularized United Labour Front asked if it was able to take control of the autonomous province. The Weg government allowed for the Free Syndical Republic of the Alley to be formed as the successor to the New German Autonomous Province. A de facto capital was set up in Westerwald as a new national guard was being formed. The Wegmat Marines deployed the 3rd Infantry Division to be stationed at Fort Priory. The 7th Fighter Squadron of the Wegmat Air Corp was also deployed to Fort Priory.

New German Grenztruppen were tasked to take and occupy the city of Westerwald on 14 April 2021. A K-9 unit was dispatched and patrolled the area searching for Wegmat and Charli D'Amelio loyalists in the area. Nothing other that a training operation took place. Patrols into the city are said to take place for the next month.

Vladimir Baruh sent the New German Grenztruppen into Westerwald to retake the land on 29 April. 3 soldiers and a k-9 held a successful campaign against ally loyal militias guarding the area. After a hour of fighting and 30 minute stalemate, the Ally Loyalists were pushed from the city.

On 1 May, the New German and Rodentian forces invaded the Priory Grasslands and fought the unorganized militia and the Ally militia stationed there. A 30-minute battle ensued, Trel was rushed and at 7:45 the flag of the New German Friekorp flew over the city. Defensive positions were taken and fought in trench warfare. At this point the Ally forces were low on ammo and pined down, a final charge went over the top and they surrendered. Small pockets of fighting against New German soldiers during the evening occupation.

End of the New German Revolution 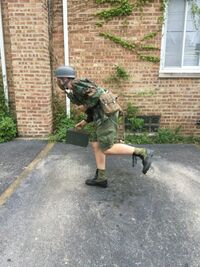 We fought hard, but we ran out of ammo, we were exhausted and...were on our last lives, good game.

— First Class Officer Will D. after the surrender of the Alley militia

On 3 May, a last stand was held by the Free Syndical Republic of the Alley at the New German Reichstag and at the Memorials of Wars Past. The New German garrison, as well as the 2nd Observation Regiment, attacked the area, resulting in most of the untrained Alley militia breaking rank. Eventually, the more experienced militia retreated to the other side of the Reichstag, where they held defensive positions while it rained. Afterwards, they surrendered.

Following the surrender, New Germany occupied the area. The leader of the Free Syndical Republic, Harlem Cortland, is still wanted for treason and war crimes.